On the morning of April 21, simultaneous power outages were reported in San Francisco, Los Angeles and New York City.

While the cause has yet to be determined, analysts say a cyber attack could be to blame. 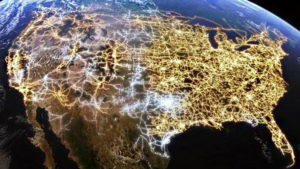 “The entire national power grid has been mapped by adversaries of the United States and it is believed that sleep trojans or malware may exist within the computer systems that maintain the grid,” Zero Hedge reported.

The first outage occurred at around 7:20 a.m. in New York, when the power went down at the 7th Avenue and 53rd Street subway station. By 11:30 a.m. the city’s transportation authority confirmed that generators were running again in the station, although the New York subways were set to run delayed into the afternoon.

Later in the morning, power outages were reported at Los Angeles International Airport, as well as in several other areas around the city.

San Francisco’s fire department responded to more than 100 calls for service in the Financial District and beyond, including 20 elevators with people stuck inside. Traffic lights were out at scores of intersections.

A 2016 Wall Street Journal report warned that the U.S. electric grid is woefully out of date and completely vulnerable to attack.

“Federal officials have long known about the vulnerability of electrical substations,” the report said, adding that a 1990 report from the federal Office of Technology Assessment warned that “virtually any region would suffer major, extended blackouts if more than three key substations were destroyed.”

The Prepper’s Blueprint author Tess Pennington said that a grid-down scenario won’t just be a minor inconvenience if it goes on for more than a day or two as losing access to the following critical elements of society would wreak havoc on the system.

“It is for this reason that we have long encouraged Americans to prepare for this potentially devastating scenario by considering emergency food reserves, clean water reserves and even home defense strategies in the event of a widespread outage,” Zero Hedge said. “The majority of Americans have about 3 days worth of food in their pantry. Imagine for a moment what Day 4 might look like in any major city that goes dark.”

A clip from American Blackout shows what a power grid failure may look like.