The suspects in the majority of a wave of recent attacks on Asian Americans are black.

This is a fact the corporate media will not report on, preferring instead to label the crimes as being committed by white supremacist Trump supporters. 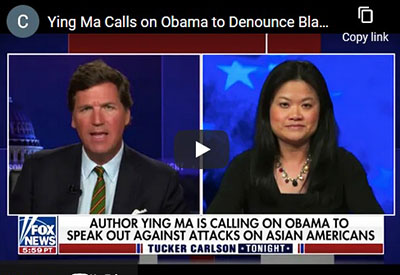 Ying Ma, the author of “Chinese Girl in the Ghetto”, says leaders on the Left “simply are afraid to utter the word ‘black.’ ”

“What we need in this country is an uncomfortable but honest conversation about the prevalence of black crime in general and black-on-Asian violence in particular,” she said in an interview Wednesday night with Carlson.

Ma, whose book tells her story of moving from post-Mao China to an inner-city neighborhood in Oakland, said leaders are needed to urge the black community “to engage in serious soul-searching.”

“So, at this point, we are calling on our friends in the black community to please help, to please display some leadership on this issue.”

Some recent cases of alleged black-on-Asian attacks include:

• New York’s WABC-TV reported an Asian woman in Manhattan was hit in the head with a hammer by a stranger who demanded she take her mask off. The online report offered no details about the perpetrator, other than she was female, but video footage of the incident showed she was black.

• In Mission Bay, California, a 26-year-old black man was arrested after repeatedly punching an Asian man who was walking with a 1-year-old in a stroller outside a store. A local KPIX-TV report identified the victim as an “Asian man” but the attacker was simply a suspect. However, surveillance video once again provided the full story. A report by San Francisco’s KGO featuring an interview with the victim also emphasized that he was Asian but didn’t mention that the suspected attacker is black.

• Earlier this month, the NYPD hate crimes unit began investigating two other assaults on Asian-Americans, CNN reported. In one attack, a 52-year-old woman sustained minor injuries when she was pushed while waiting for a subway train in Brooklyn. And a 15-year-old boy was taken to a hospital with minor injuries after he was approached by three people who allegedly made anti-Asian remarks and hit him.

Manhattan Institute scholar Heather Mac Donald argued that the media and the Democrat establishment are heavily invested in “one all-powerful narrative.”

For example, the murder of 10 people at a grocery store in Boulder, Colorado, drew nonstop coverage when it was believed to be motivated by white supremacy. But when the suspect turned out to be a Muslim immigrant, media moved on to other stories.

In Atlanta, Mac Donald said, the false narrative that developed about the spa shootings in March “still has legs.”

“It represents a double lie — first, that the massacre was the product of Trump-inspired xenophobic hatred, and second, that whites are the biggest perpetrators of violence against Asians,” Mac Donald said.

Last month, the Senate overwhelmingly passed an anti-Asian hate crimes bill that was said to have gained momentum after the shootings of the Asian women in Atlanta.

Mac Donald recounted the details of numerous incidents of attacks on Asians in the Bay Area and New York City this year, noting “the suspects in all of these cases were black; the news reports rarely mentioned that detail. Had the suspects been white, their race would have led each news report, as it did for Robert Aaron Long.”

Mac Donald warned that the “lie about white supremacist violence is not innocuous.”

“It forms the basis of the Biden administration’s policy in national security and in a host of domestic welfare programs,” she said. “It is the pretext for Big Tech and Big Media’s silencing of speech. And the shamelessness with which that lie is constructed grows more brazen by the day. It must be fought with facts before it irrevocably alters our culture.”

What if proof emerges the 2020 election was stolen? Analyst weighs in, Trump reminds: 'I have not conceded'
Read more