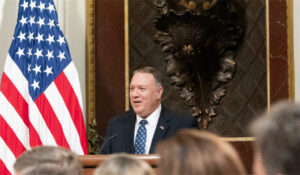 A perennial critic of Pompeo and other critics of China including Nigel Farage, Chen replied to a post highlighting how the “Chinese Communist Party’s war on faith targets Christians, Muslims, Buddhists, and Falun Gong devotees alike” from the official U.S. Department of State’s Twitter account. …

“The Party spares no one,” the post and accompanying graphic adds.

In response, Chen replied “Pompeo surely won’t be spared. He will be gone for good by Jan 20.”