In September 2017, pop icon Cher offered to “take a dreamer” into her home and business.

She tweeted: “Those Who Can Must Take a DREAMER In2 Their Home & Protect Them. I’m Ready 2 Do This & Others in MY BUSINESS WILL DO THE SAME. SANCTUARY.”

On April 14, 2019, Cher seemed to change her tune on the immigration issue, suggesting that Los Angeles should first take care “of its own.”

Cher tweeted: “I Understand Helping struggling Immigrants, but MY CITY (Los Angeles) ISNT TAKING CARE OF ITS OWN. WHAT ABOUT THE 50,000+????????Citizens WHO LIVE ON THE STREETS. PPL WHO LIVE BELOW POVERTY LINE,& HUNGRY? If My State Can’t Take Care of Its Own(Many Are VETS) How Can it Take Care Of More?”

Many on Twitter noted the irony of Cher’s reversal:

“I’ll never forget where I was and what I was doing the moment Cher became a Republican,” tweeted The Daily Wire’s Michael Knowles.

“Cher, if you keep talking like this, you’re going to get banned from Twitter,” tweeted CJ Pearson, a political activist who says he is “a leading voice among right-leaning youth.” 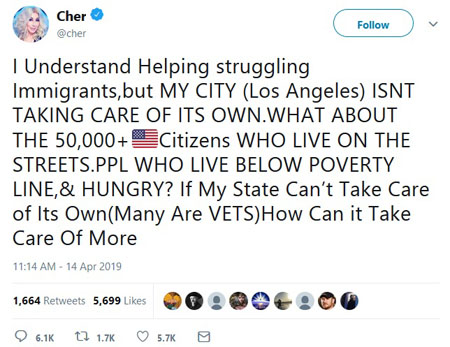 The president himself tweeted on April 15: “I finally agree with Cher.”

On April 15, Cher elaborated on her tweet from the previous day: “There must be a process. Ppl who are looking 4 asylum,& Qualify,must be given access 2 judges,&properly interviewed. Then They can be sent ”EVENLY” 2cities. Not Just THOUSANDS Bussed 2Calif, NY, Etc 4 revenge. These are ppl. WE ARE SANCTUARY CITIES BECAUSE WE DONT THROW PPL 2 DOGS.”

President Trump also tweeted on April 15: “Those Illegal Immigrants who can no longer be legally held (Congress must fix the laws and loopholes) will be, subject to Homeland Security, given to Sanctuary Cities and States!”