Chauvin trial in review: Media-missed nuances and what about Joe?

After a bumpy road, the trial of Policeman Derek Chauvin is over and the Minneapolis officer has been convicted of murder and manslaughter by a jury of six whites, four blacks and two biracial individuals. The sentencing by Judge Peter Cahill will be in eight weeks, though no precise date has been set.

With announcement of the verdict, there was a distinct sense of relief that it was all over and that the inevitable jury determination was now history, and that it would lay the carpet for an era of healing. It would diminish the enmity which blacks have for white-skinned residents who they accuse of being supremacists imbued with privilege and an inborn feeling of superiority over their black and brown brothers and sisters. 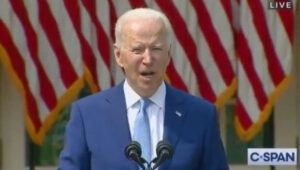 It would serve to recognize that all policemen are not evil and racist, and that the bad policeman will be dealt with by law, and that law enforcement is an integral part of the society in which we all live and on which America was built.

The opportunity to encourage healing belonged to President Joe Biden who was elected last November on his promises that he would bring unity to a divided and racially troubled United States. His comments, however, did more to allow racial tensions to continue, rather than to heal and bring peace.

He could have used the healing words of the President with whom he (Biden) had partnered for eight years — who said that we do not live in a Black America or a White America. No, cautioned Barack Obama, there is not a liberal America and a conservative America. There is the United States of America, period.

But Biden, whose temperament and mental agility is clearly challenged and dented by his apparent senility and memory lapses, told the country what no one, except perhaps far left progressives, wanted to hear.

The nation, whispered Biden in low tones into a microphone, is a “systemically racist” country and the verdict by a Minneapolis jury against a racist cop does not cure the problem. It was a giant step forward — but much too rare a step for Black Americans who have been killed or abused during interactions with police. “Systemic racism is a stain on our nation’s soul; a knee on the neck of justice for black Americans,” he intoned.

On April 20, after three weeks of an emotional trial and 10 hours of deliberation, Officer Chauvin, an 18-year police veteran, was found guilty of the murder and manslaughter of George Floyd, a 46-year-old black man, by detaining him with a knee to his throat for nearly nine and one-half minutes, allegedly depriving him of oxygen for his lungs, heart and brain. Chauvin’s attorney, Eric Nelson, argued that Floyd’s death was due to a combination of other causes including a sick heart, blocked arteries and a system sated with drugs, and that the policeman had used techniques for controlling the resisting Floyd taught in the Minneapolis police academy. But the jury did not accept the defense explanation.

In trial and pretrial motions, Defense Attorney Nelson had contended that Officer Chauvin could not receive a fair trial in Minneapolis given the saturation of negative publicity against him. Pre-trial motions for changing the venue of the trial were denied by Judge Cahill. While testimony was being heard by the un-sequestered jury, the city of Minneapolis announced that it was awarding the Floyd family $27 million dollars as damages caused by the arrest and death of Floyd. New motions for a mistrial and for changing the venue or for delaying the trial were filed and argued by defense counsel, but were again denied by the trial judge.

As the criminal litigation went forward, Floyd, an ex- convict who had served five years in prison for home invasion, was being hailed by the media and throughout the city and on busy streets as a hero who was deserving of justice with a jury decision that he was murdered by a white policeman.

During deliberations, President Biden, who holds a law degree from Syracuse university, weighed in publicly and said that he was “praying that the jury would do the right thing,” and that the evidence was “overwhelming.” His involvement in such a manner while the case was in the hands of jurors was contrary to legal ethics and protocol.

Even though the jury was sequestered for deliberations, Biden should have known better. Yes, he has credentials as a lawyer but his legal acumen is questionable. In law school, Biden finished near the very bottom of his class, and classmates have been quoted as saying that Joe Biden was the “dumbest S.O.B. in the class.”

Taking Biden’s lead, Los Angeles Congresswoman Maxine Waters threatened that if Chauvin is not found guilty of “first degree murder,” (with which he was never charged,) there would be retaliation.

“We have got to get more confrontational,” she stormed out over the airwaves. “We’ve got to make sure that they know that we mean business.” Subsequently, Waters was asked to apologize for her threats, but she refused to do so.

Comments by Biden and Waters made as the jury deliberated found their way to the court, and Judge Cahill predicted that the remarks of Biden and Waters, and the public airing of the settlement of $27 million awarded to the Floyd family would very likely be part of an appeal by Officer Chauvin. He opined further that it could result in an order for a new trial.

Millions of Americans, white and black, do not believe that America is a “systemically racist” nation with the arms of prejudice against blacks reaching into every corner of society as Biden has indicated. The President has a “misperception” that bigotry is everywhere, even as real data tells the story that “racism exists, but there has never been less racism in the USA than there is now,” a newspaper columnist recently wrote. But what about Biden’s personal conduct as he accuses citizens of the United States of being racists? Is that “stain” of which he speaks, something with which he has personal experience? Maybe he should explain his biased comments during the 1970s and 1980s when he took a stand against the desegregation of public schools, and bragged of his close friendship and admiration for Alabama Governor George Wallace.

On the debate stage last year when he was seeking the nomination of his party, Sen. Kamala Harris, now his Vice president, but then a presidential wannabe, called out Biden for his past conduct as a racist and his close associations with southern Democrats who had nothing but contempt for Blacks.

Records tell us that Biden counted himself as a friend of Alabama Governor George Wallace who ran for President in 1964, 1968 and 1972. Wallace’s campaign rallying cry was “Segregation Now, Segregation Forever.” During many of his speeches, he boasted of an award he had received from Governor Wallace who had lauded him as “one of the outstanding politicians of America.” In a speech to a southern audience, Delaware Sen. Biden once said that “we Delawareans were on the side of the south during the Civil War.”

In 1975, he told the Philadelphia Inquirer that “I think that the Democratic party could stand a liberal George Wallace–someone who is not afraid to stand up and offend people and someone who wouldn’t pander, but would say what the American people know in their gut is right.”

Back in 2008 after Barrack Obama was a candidate for president, Biden described the candidate to a gathering as a “mainstream African American who is articulate and bright and clean and a nice looking guy. I mean that’s a storybook, man.” At the time, Biden was severely criticized for the comment.

In the 1990s, Sen. Biden was an enthusiastic law and order supporter and he spearheaded enactment of the 1994 Federal Crime bill. Cory Booker, a New Jersey Democratic senator and a former mayor of Newark was a critic of Biden’s crime bill. The Biden backed legislation, he has said, “inflicted immeasurable harm on black and brown and low income communities.”

Joe Biden has been around government for about a half century. He has been accused of being corrupt and that he arranged for his son, Hunter, who had been kicked out of the navy because of a cocaine addiction, to get high paying jobs for which he wasn’t qualified; and allegedly facilitated Hunter’s million dollar contracts with Chinese officials.

But suddenly, none of that ever happened. If Joe Biden is indeed slipping, as many people believe, his memory is failing in a very convenient way.

Chauvin trial in review: Media-missed nuances and what about Joe?