The relative success of charter schools is one unreported metric on public acceptance of the Democrat-backed teachers unions.

As Democrat governors bowed to pressure from the unions and kept public schools closed in their states, a large number of charter schools remained open and saw their enrollment numbers surge to unprecedented levels, a report said. And the professional Left is not happy about that. 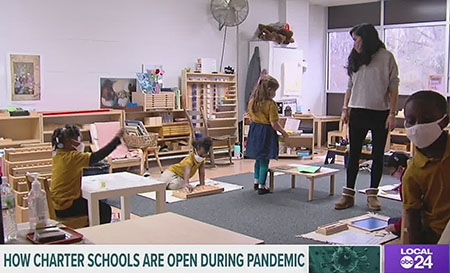 The publicly funded independent schools “have been praised as some of the heroes of the coronavirus pandemic, but don’t expect them to win any awards from Democratic governors or the Biden administration,” Valerie Richardson reported for The Washington Times on May 13.

Kevin P. Chavous, president of Stride K12, an online charter program, said his schools never missed a beat throughout covid shutdowns, and even helped train free of charge about 50,000 outside teachers in virtual education.

“The schools that we run were among the only public schools in America that did not lose a day of instruction time during the pandemic because we did have folks who were steeped in knowledge on how to execute effectively,” Chavous said Tuesday at a Center for Education Reform virtual event.

Despite their many successes, charter schools “face an increasingly hostile political climate as previously friendly Democrats line up with teachers’ unions calling for more accountability and less funding,” Richardson wrote.

Why are teachers’ unions so opposed to the unprecedented growth of charter schools?

A big reason is money.

The vast majority of charter schools are not unionized. The more enrollment grows in charter schools, the more teachers are hired in those schools and that means less dues paid to the unions.

“For three decades, leading Democrats have been willing to draw the line at charter schools, supporting them enthusiastically through the Clinton and Obama administrations. But no longer,” said Michael Petrilli, president of the Thomas B. Fordham Institute. “The Biden administration and their allies in the states are putting their political interests over the needs of kids, even though the case for charter schools is stronger than ever, and even though charter schools have been working heroically to serve students during the crisis.”

Joe Biden also has been critical of charter schools, calling during the campaign to ban federal funding for any charter schools, which are typically nonprofit, set up by for-profit corporations.

JoAnn Mitchell, founder of Mission Achievement and Success Charter School in Albuquerque, said her school increased its enrollment by 30 percent, the highest in the state for any non-virtual school, after reopening as soon as the state allowed it on Sept. 8.

“It became optional on Sept. 8 for schools to come back, and across the state, [there were] very few,” said Mitchell. “We were one of only a dozen schools that returned in the entire state, but our families, we asked, ‘What do you want?’ That’s what they wanted.”

In Pennsylvania, charter-school attendance rose in the fall by 14 percent, or 24,000 students, with the vast majority signing up for cyber-schools, while school districts saw their enrollment drop by about 45,000, said Nate Benefield, vice president of the free-market Commonwealth Foundation in Harrisburg.

As they continued to grow and thrive, charter schools saw the target on their backs painted by teachers’ unions and their Democrat allies grow larger and larger.

Pennsylvania Democrat Gov. Tom Wolf announced in February an initiative to “fix our charter school law” by reworking the state funding formula, which would cut an estimated $229 million annually from charter programs while adding $1.8 billion to the school district budgets, Richardson reported.

Wolf also dismissed in April the Pennsylvania Charter Appeals Board, according to Keystone Crossroads, which will prevent the board from approving charter schools rejected by their school districts.

“It’s ironic that almost 12 months into his school closures, Gov. Wolf is attacking the schools that actually continued to provide their students a quality education throughout the pandemic,” said Matt Brouillette, president of Commonwealth, in a Feb. 26 statement.

California Democrat Gov. Gavin Newsom signed legislation in 2019 to grant school districts the sole authority to approve or deny charter schools, removing the ability of rejected schools to appeal to the county or state.

Shawn Hardnett, CEO and founder of Statesmen College Preparatory Academy for Boys in Washington warned that the challenges for charter schools are getting greater despite their success.

As public schools struggled to reopen virtually after the shutdowns, he said, “the next day we were at 95 percent attendance online, shirts and ties, nobody missing, 100 percent of our staff there.”

“And people came in to watch, literally to count, to make sure that all kids we were saying were there, were there,” Hardnett said.