CDC on the defensive: ‘At no time’ suggested that ‘masks were intended to protect the wearers’

According to a statement issued to Fox News host Tucker Carlson’s show by the Centers for Disease Control (CDC) on Wednesday, face masks don’t protect the wearer, but the CDC still wants everyone in the country to keep wearing them. 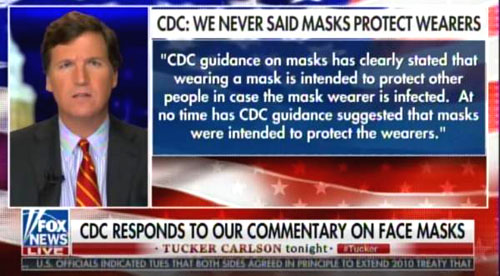 The CDC said in its statement that Carlson’s show had misrepresented their recent report which found that 70 percent of those infected with coronavirus in July reported “always” wearing a mask. The results suggest that masks aren’t very effective in stopping the virus.

The CDC said in the statement: “At no time has CDC guidance suggested that masks were intended to protect the wearers.”

Following is a partial transcript from Carlson’s Wednesday broadcast:

In California, citizens rebelled. In January 1919, five thousand members of the newly formed Anti-Mask League of San Francisco gathered to call for the mayor’s resignation if he didn’t repeal his mask order. Five days later, the mayor complied. Science vindicated that decision in the end.

A year later, a study found that compulsory mask use likely had no effect on curbing the Spanish flu.

We live in a very different time. American society, of course, is far less cohesive than it was a hundred years ago and Americans seemed far more passive than they did. Those who disagree with the prevailing orthodoxy have less power than they’ve ever had.

Dissent used to be a defining feature of American life, but no more. Now, we have mandatory consensus. Masks are good. Anyone who questions the utter goodness of masks is bad…

…So what is the science on masks? Well, as it happened, we have the latest for you tonight. And the science comes interestingly from the CDC whose director has told you that masks were magic, more effective than vaccines.

But the numbers from the CDC suggests otherwise. A new study conducted by 11 medical institutions analyzed a group of people who tested positive for COVID during the month of July. Here’s the interesting part.

So clearly this doesn’t work the way they tell us it works. Clearly, someone has been lying to us, many people actually. How did this happen? Well, the short answer is we’re not sure how so many people got the coronavirus were wearing masks, but there are clues, clues that our leaders appear to be ignoring.