A yoga instructor and 30 students in a forbidden co-ed class were arrested by Iranian authorities.

Yoga classes are permitted in the Islamic Republic but are strictly regulated. Classes must be taught by authorized instructors and must be gender separate. 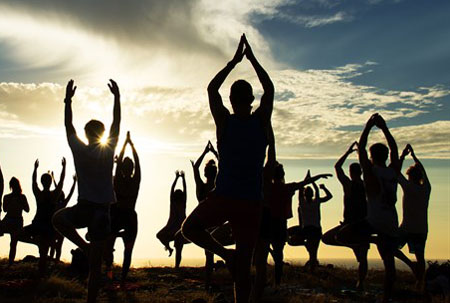 Authorities said the arrested yoga instructor was not licensed by the state and that the class included both men and women.

Iranian police raided the yoga class, which was being held in a private home in the city of Gorgan in northern Iran.

Soleimani added that the class was advertised online, via social media outlets like Instagram. Police said they had been monitoring the home where the class took place for some time prior to the arrests.

Local law enforcement officials are preparing an indictment against the instructor of the unauthorized class.

“They [Iranian authorities] think even the word yoga is problematic based on the Sharia,” one user tweeted.

“An establishment that finds even yoga harmful does not need the USS Abraham Lincoln warship to end its existence,” another Twitter user posted, referring to the recent deployment of U.S. warships to the region.

Others say they have cancelled their plans to sign up to yoga classes following the arrests in Gorgan.

“I guess the authorities need to tell us what exactly we are allowed to do in this country,” another Twitter user posted.

In 2017, Iranian sports authorities issued a ban on the Colombian dance aerobics exercise zumba and “any harmonious movement or body-shaking instruction.”