President Donald Trump first threatened to veto and then signed Congress’s massive spending bill that appropriates funds for only a fraction of the wall at the U.S.-Mexico border.

Trump tweeted on March 23: “I am considering a VETO of the Omnibus Spending Bill based on the fact that the 800,000 plus DACA recipients have been totally abandoned by the Democrats (not even mentioned in Bill) and the BORDER WALL, which is desperately needed for our National Defense, is not fully funded.” 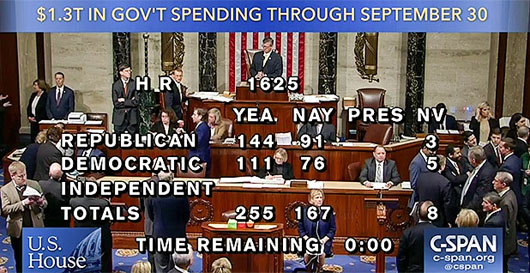 The $1.3 trillion spending bill, which has been passed by both chambers of Congress, appropriates $1.6 billion for immigration and border security for the next six months, including $600 million for the border wall.

Trump, who vowed the wall would be built in his first term, said the border wall would require 700 to 900 miles of new sections

White House budget chief Mick Mulvaney said the spending bill funds 110 miles of border barriers, of which only 33 miles cover open border areas that have no existing walls or fencing.

White House Director of Legislative Affairs Marc Short told reporters on March 22 that “We certainly continue to ask for additional funding to continue the wall throughout this year. This (spending bill) is for six months because Congress has been unable to complete the appropriations process.”

If the trend of building 33 miles of new border wall per half-year were to continue, it would take between 10-1/2 and 13-1/2 years to complete the project, depending on the exact mileage targeted.

Radio host Rush Limbaugh predicted the bill “is going to be the first phase of Trump voters beginning to go wobbly. This is the swamp on steroids.”

Republicans, Limbaugh noted, contended that “ ‘We don’t have 60 votes in the Senate so we have to do it this way,’ blah, blah, blah, blah, nothing’s changed. … My fear… I always thought it would be immigration. This is the kind of thing that was going to stop – specifically under that umbrella, definition, ‘draining the swamp.’ My sense is that this is going to cause a massive amount of anger and opposition.”

Limbaugh continued: “You know, Ronald Reagan never had 60 votes in the Senate. You know what he did? He vetoed this stuff.”

Rep. Jim Jordan, Ohio Republican and member of the House Freedom Caucus, expressed the Caucus’s outrage in an appearance on Fox & Friends.

Host Brian Kilmeade asked: “You said that this may be the worst bill Republican leadership has ever let come to the floor. Well, they’re doing it not because they want to do it, but because they have to compromise with Democrats who have a totally different feeling about spending than you do, congressman.”

Jordan replied: “The American people didn’t elect Democrats to control the United States Congress. They elected Republicans. I don’t think we told the voters when we were running for the job when they gave us the privilege to come here and serve that we’re gonna continue to fund Planned Parenthood, and we were gonna restrict Second Amendment liberties, let some bureaucrats take away your Second Amendment rights, not a court of law. I don’t think they said were gonna fund this gateway, earmark, boondoggle project and not fund the border wall? I mean, the one thing we don’t fund is the one issue we all campaigned on, the border security wall, and that is not in the legislation. So it can’t get any worse than this bill.”