The tiny oil-rich nation of Brunei is set to institute new Sharia laws which include stoning to death homosexuals and amputations for theft.

Under current law in Muslim-majority Brunei, homosexuality is punishable by up to ten years in prison. 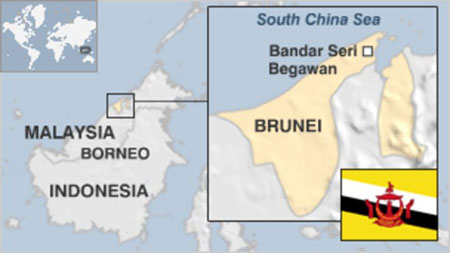 But, starting in April, the government plans to amend the penal code to provide that LGBT people and adulterers could be stoned to death.

The new penalty for theft is amputation of the right hand for a first offense, and the left foot for a second offense.

The new penalties, which also apply to children, are in new sections under Brunei’s Sharia Penal Code and will come into effect April 3, Amnesty International said in a statement.

Under secular laws, Brunei already prescribes caning as a penalty for crimes including immigration offenses, for which convicts can be flogged with a rattan cane.

In 2014, Brunei became the first East Asian country to introduce Islamic criminal law when it adopted fines or jail for offenses such as pregnancy outside marriage or failing to pray on Friday.

In 2015, Brunei banned excessive Christmas celebrations for fear that Muslims could be led astray.

Since 1967, Sultan Hassanal Bolkiah has ruled Brunei as head of state with full executive authority. Public criticism of his policies is extremely rare.

Rachel Chhoa-Howard, Brunei researcher at Amnesty International, said some of the potential offenses under the amended penal code “should not even be deemed crimes at all, including consensual sex between adults of the same gender. To legalize such cruel and inhuman penalties is appalling of itself. Brunei must immediately halt its plans to implement these vicious punishments and revise its penal code in compliance with its human rights obligations. The international community must urgently condemn Brunei’s move to put these cruel penalties into practice.”

Brunei, a former British protectorate of about 400,000 on Borneo island, is the first country in east Asia to adopt the criminal component of sharia at a national level.

Dede Oetomo, one of Indonesia’s most prominent LGBT activists, said it would be a gross violation of international human rights if the changes went ahead. “It is horrible. Brunei is imitating the most conservative Arab states,” he said.