Brother, can you spare a mobile phone donation? Cash, credit cards go the way of dinosaurs in China

Paper or plastic to pay for something? That is so 2013.

In China, mobile pay is the way to go in 2017 and beyond, and is even rumored to be the preferred method of payment for street beggars, Evelyn Cheng wrote for CNBC on Oct. 8. 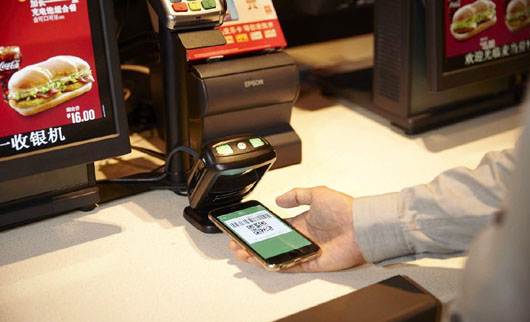 In 2016, mobile payment volume in China more than doubled to $5 trillion, according to a study in May by Hillhouse Capital. In the first quarter of this year, Alipay had 54 percent of the mobile payments market, and WeChat Pay accounted for 40 percent, the study said.

“The transformation of a society limited to bills denominated in 100 yuan ($15) or less into one where QR payment codes abound was by far the biggest change in mainland China since my last visit four years ago,” Cheng wrote.

“When eating out or shopping with local friends, they paid by scanning a QR code on the restaurant table or by showing a similar code on their smartphones to the store clerk. The running joke was that street beggars would rather take a mobile donation than cash.”

Alipay, which is owned by Alibaba affiliate Ant Financial Services, has 520 million users, according to its international website.

“Mobile pay is growing so rapidly in mainland China that as a foreigner I sometimes found it difficult to complete basic transactions without it,” Cheng noted.

“When I tried to pay at a Beijing McDonald’s on a late night, the only payment options were China’s Union Pay credit card system, Apple Pay or WeChat Pay and Alipay. As an American visitor without a Chinese bank account, I wasn’t able to find a way to use those systems and the store clerk wouldn’t take my cash.”

Cheng continued: “Taxis were also nearly impossible to hail in Beijing due to the rise of Didi, a ride-hailing app that bought Uber’s China operations in a deal worth $35 billion last summer. Because Didi was linked through WeChat, I couldn’t use it without a Chinese bank account.

“When I finally did get a taxi, the driver gave me a fake 50 yuan bill in change. Several stores also claimed three of my 100 yuan bills from a New York money exchange were counterfeit. If I could participate in the cashless society, I would not have lost about $50.”

With more than 6 million Chinese traveling abroad during the “Golden Week” national holiday in early October, pressure is also on popular tourist destinations like Japan and Hong Kong to add mobile pay services.

“Just over the border in Hong Kong, I heard a few mainland Chinese customers asking a store clerk to scan their phones’ QR codes while Cantonese-speaking locals paid in cash,” Cheng wrote. In April, Nikkei reported that the number of stores accepting Alipay in Japan will double to 45,000 this year, according to the regional head of Ant Financial Services.