Bostonians hit the streets against vaccine mandate as columnist declares: ‘I will not comply’

Editor’s Note: Known to WorldTribune readers as a mild-mannered columnist with a solid grasp of facts and historical context, Jeff Kuhner is a rock star in Boston where he headlined a ‘Stop the Forced Jab’ street rally Sunday that unleashed the kind of pent-up frustration that 250 years ago was building against the British.

American patriots are mad as hell — and we are not going to take it anymore. This is the real meaning of the massive Freedom Rally, sponsored by The Boston Broadside, which took place Sunday, Sept. 26 at 1:00 pm in front of the Massachusetts State House.

The reason is simple: Biden’s mandate is the road to fascism, a form of medical apartheid and segregation, which if not stopped, will destroy our constitutional republic, equality under the law and basic civil rights and individual liberties.

Biden has gone full authoritarian with his illegal, unconstitutional and tyrannical vaccine mandate — especially, on employers with over 100 employees, as well as on all health care workers and most federal government employees.

Over 80 million Americans — myself included — now face this harrowing choice: the jab or my job. We are no longer living in a free society. Biden’s regime has become a dictatorship. He has crossed the Rubicon.

Sunday’s rally was more than an expression of frustration, anxiety and anger; rather, it was the beginning of a massive popular resistance. It was the launch of a new civil rights movement — a peaceful, non-violent grassroots effort to end medical Jim Crow and forced anti-Covid-19 vaccinations.

The vaccine mandate is not just bad policy. It’s immoral. The government has no right to coerce, pressure or intimidate anyone to take an experimental jab against his or her will. This is a fundamental violation of human rights. The same leftists, who shout “my body, my choice” when it comes to abortion, now want to force everyone to inject a foreign, potentially dangerous substance into their arms.

The great myth of the Covid-19 shots — whether it’s Pfizer, Moderna or Johnson & Johnson — is that they are actually “vaccines.” That is false. Instead, they are a new form of experimental gene therapy.

They function by changing and adapting one’s DNA and genetic structure to combat the Coronavirus. They are not anything like traditional vaccines, say for the measles, polio or smallpox. And unlike traditional vaccines, the Covid jabs don’t work. They have not prevented the spread of the virus. In fact, despite over 180 million Americans being “fully vaccinated” (getting both doses of Pfizer or Moderna or the one shot of Johnson & Johnson), there are a record number of “breakthrough” cases happening.

According to the Centers for Disease Control and Prevention (CDC), compared to last year at this time — and this is before the gene therapy shots were even rolled out to the public — Covid-19 infections are up nationally 300 percent, and hospitalization and death rates are much higher as well. In other words, the jabs have failed to curb the transmission of the virus and its other so-called “variants.” The fully vaccinated can contract or transmit the virus just as easily as the unvaccinated. Biden’s claim that this is a “pandemic of the unvaccinated” is a lie.

Moreover, Big Pharma, Big Media and Big Tech are systematically trying to suppress and censor the truth about the large number of adverse reactions to the jab. The Vaccine Adverse Event Reporting System (VAERS), which is linked to the CDC’s own website, reports that over 14,000 Americans have died as a result of taking one of the anti-Covid shots. There have also been more than 675,000 adverse reactions — including numerous severe cases such as heart attacks, brain damage, paralysis and neurological disorders.

A recent study from the University of California showed that young teens, especially males between the ages of 12 to 15, are six times more likely to die from taking the shot than from contracting the virus itself. Many nurses who attended the rally have personally witnessed the dangerous adverse reactions to the jab. In particular, they are sounding the alarm about the high cases of male teens who have experienced heart inflammation and cardiac arrest as a result of the shot. The medical establishment’s response? Dr. Anthony Fauci wants to mandate the jab for all school children ages 5 and above. This is not just grossly irresponsible and reckless; it is medical experimentation, seeking to turn all of us — including our children — into guinea pigs and laboratory rats. 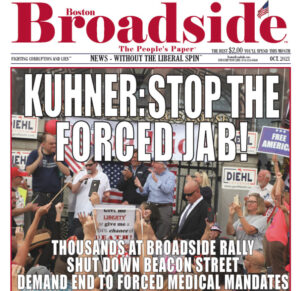 Then there is the issue of natural immunity — a topic our political and media class desperately want to avoid. The CDC states that at least 35 million Americans have been infected with Covid-19 (they admit, as The Wall Street Journal has reported, that the real number is probably closer to 100 million). This means large segments of the U.S. population already have natural antibodies to combat the virus.

In a recent major study from Israel, research scientists have conclusively proven that natural immunity is 13 times — yes, 13 times! — stronger and more durable than the artificial immunity conferred by the shots. In fact, the CDC now concedes the protection from the jab wears off after only 5-6 months, which is why it is pushing so hard for another round of booster shots.

Fauci admits the real goal is to force Americans to permanently get the jab twice a year for the rest of their lives. This begs the question: Why should unvaccinated citizens, many of whom have natural immunity, be discriminated against when they have longer and better protection from the virus than the vaccinated do?

The answer is obvious: The vaccine mandate and passport system have nothing to do with public health or following “the science.” It is about power and control.

Already blue states, such as New York and California, are mandating vaccine passports. If you don’t show proof of vaccination, then you are barred from going into a restaurant, bar, gym, theater or concert. In short, the ultimate goal of the radical left is to impose medical martial law. It is to deny any unvaccinated person the ability to work, earn a living, feed their family or have any normal interaction with mainstream society. The unvaccinated are to be treated as social pariahs — modern-day lepers — who are to be forced to shelter in their homes and reduced to third-class citizens.

Those who forget history are doomed to repeat it. It was the Democratic Party and liberal progressives that created racial segregation in the Old South. Democrats passed every Jim Crow law. We have come full circle, except now the vile, evil regime of discrimination and persecution is based not on skin color but vaccination status. Yet, regardless of the reasons, persecution is still persecution. Just as blacks were once denied the ability to work or go to school or be served at a restaurant, the same sick form of apartheid is rearing its ugly head again. This time, however, it is aimed at those who refuse to submit to the jab.

The Biden regime faces a fundamental contradiction. Either the jab works, which means those who have taken it are inoculated and protected from the virus. Hence, the unvaccinated pose no threat to them and should be left alone. Or it doesn’t work, which means the government has no business forcing it on others. The entire vaccine mandate is based on this inherent contradiction. This is why Biden and the Democrats must resort to increasing coercion, pressure, harassment and ultimately, authoritarian rule, to force universal compliance.

Like the old segregationists, there is only one way to stop them: massive civil disobedience.

We must use all political, legal and peaceful means to oppose Biden’s growing dictatorship. Our constitutional republic and very freedoms hang in the balance.

I will not comply with Biden’s illegitimate mandate. Sunday’s rally shows — beyond the shadow of a doubt — that countless patriots won’t as well. Will you?

Bostonians hit the streets against vaccine mandate as columnist declares: ‘I will not comply’ added by Editor One on September 27, 2021
View all posts by Editor One →