Book: Hillary would have been ‘booziest’ president since FDR

Hillary Clinton is known to knock back “a cocktail – or three,” author Amy Chozick notes in her book “Chasing Hillary”. 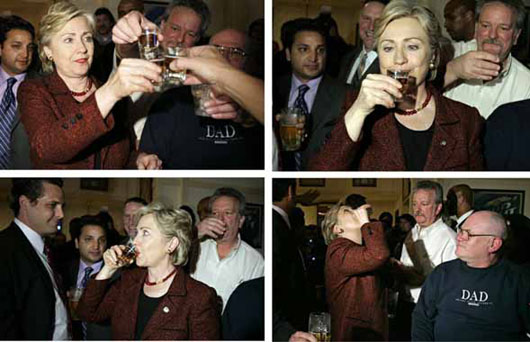 Chozick said that, if the twice failed presidential candidate had actually won, Hillary would have been the “booziest president since FDR.”

National Review’s Kyle Smith noted that Chozick’s portrayal of Clinton’s drinking habits may cause the “attentive reader” to “wonder whether Clinton has a drinking problem.”

Chozick writes that Clinton would have imbibed “more than most previous presidents.”

Clinton even bragged about going up against Sen. John McCain in a vodka drinking contest. She said there was no winner as both contestants “agreed to withdraw in honorable fashion I think after having reached the limits that either of us should have had.”

In her memoir “What Happened,” Clinton admits to consuming alcohol and junk food to cope with her election loss to President Donald Trump, writing that she drank her “share of chardonnay” and was told by her friends that she should take the prescription drug Xanax.