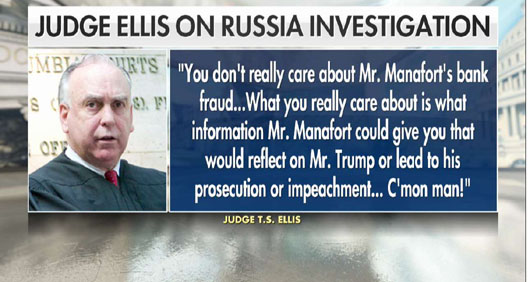 In the May 4 exchange in the U.S. District Court for Eastern Virginia, Ellis blasted Michael Dreeben, Mueller’s lawyer in the courtroom.

“If I look at the indictment, none of that information has anything to do with links or coordination between the Russian government and individuals associated with the campaign of Donald Trump,” Ellis said. “So I don’t see what relation this indictment has with anything the special prosecutor is authorized to investigate.”

The judge said Mueller’s real intention was “to exert leverage on a defendant so that the defendant will turn and provide information on what is really the focus of the special prosecutor,” namely President Donald Trump.

Dreeben replied, the Mueller team’s “investigatory scope” permitted them to include wrongs committed a decade before Trump declared his candidacy for president.

Ellis responded: “My question to you was, how does bank fraud and these other things that go back to 2005, 2007, how does that have anything to do with links and/or coordination between the Russian government and individuals associated with the campaign of Trump?”

Dreeben replied: “We are not limited in our prosecution authority to crimes that would fit within the precise description that was issued in this public order.”

Ellis said: “I’ve been here a long time. The vernacular is to sing,” adding that Mueller was seeking “unfettered power” – something the founding fathers fought against. “What we don’t want in this country is we don’t want anyone with unfettered power. So it’s unlikely you’re going to persuade me that the special prosecutor has unlimited powers to do anything he or she wants.”

Dreeben said Mueller is following both the May and August 2017 orders from Deputy Attorney General Rod Rosenstein, who oversees Mueller. But Ellis responded that the order he was given had 75 percent of the August memo redacted.

“I have that right here, and I’m glad you raised it because 75 percent of it is blocked out, redacted. Why don’t I have a full copy it,” Ellis asked.

“Well, let me use a phrase that I’m fond of that I used to use with my children,” the judge said. “I can’t use it with my wife, but I’ll be the judge of whether it relates to the others.”

Dreeben said he would consult with the intelligence community to see if the rest of the classified memo could be shared with the judge.

“Yes, of course, you may do that,” Ellis replied. “If any part of it is classified, it won’t surprise you to know that a district judge is fully cleared. In fact, I have several espionage trials underway.”

Ellis asked Dreeben if he had anything to add.

“Good choice on your part,” Ellis replied. “Thank you for your arguments. They were entertaining.”