The Kenosha, Wisconsin mayor, the district attorney, and the lead detective in the Kyle Rittenhouse case are all members of the same family, a report noted.

John Antaramian was elected in 2020 for his sixth term as mayor and was the city’s leader amid the summer of 2020 riots during which Rittenhouse shot three rioters, two of them fatally. 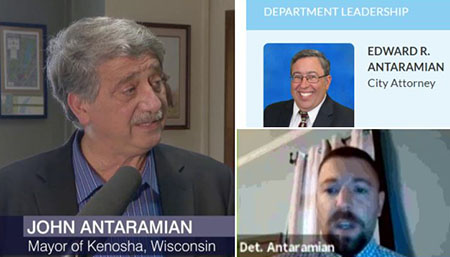 “Many sources have told us he (Mayor Antaramian) will not be seeking a seventh term because of the immense backlash from the Kenosha riots of 2020,” the independent media outlet Kenosha County Eye reported. “Most Kenosha residents view his response as very poor – he is the chief executive of the city, including the police department. We didn’t hear from him. He didn’t lead. Many joke that he was hiding in his basement. Some tell us he was hiding in Lake Geneva. We don’t know for sure – he wont tell us.”

The mayor “has a lot at stake in the Rittenhouse trial,” Kevin E. Mathewson noted in the Nov. 2 op-ed for Kenosha County Eye. “He wants Kyle convicted. He wants Kyle to take the blame and distract us from his failures as our leader. Lucky for John, he has a lot of powerful family members in charge here in Kenosha.”

Benjamin Antaramian “wants Kyle convicted. Benjamin was very thirsty to connect Kyle Rittenhouse to the ‘Kenosha Guard’ Facebook page. He grilled Dominic Black about if they had seen the page or not. They desperately wanted to connect the two. They could not. Mark Zuckerberg of Facebook told this to the public twice, once on a Facebook Q and A and again in front of the U.S. Senate. This is a common myth that is repeated by the media and naive folks,” Mathewson wrote.

Rittenhouse “came to Kenosha of his own accord on the 25th – to volunteer removing graffiti. Law enforcement at the federal level, Facebook, and other forensic reviews have determined there was no such connection. The ‘Kenosha Guard’ was simply a plea for help when our local leaders like John the Mayor and Tony the Governor would not help. Benjamin will be sitting at the prosecutor’s table for every day of the trial. Today, he held up the rifles that were carried by Rittenhouse and Black, Kyle’s friend,” Mathewson noted.

Meanwhile, the search warrant for the contents of Gaige Grosskreutz’s cell phone has been released to the public. Grosskreutz was the third man shot by Rittenhouse on Aug. 25, 2020 and the only to survive.

Grosskreutz is seen in still photos and video from the riots pulling a gun on Rittenhouse, who shot Grosskreutz. He suffered a major injury to his bicep.

Kenosha police asked a judge for the search warrant on Sept. 23, 2020.

Kenosha County Eye noted that the police had “testified under oath in the affidavit that Grosskreutz’s cell phone ‘will contain evidence to include: images, videos, text, messages, phone calls, voicemails, social media messages, social media posts, other forms of electronic data, which things may constitute evidence of a crime.’ ”

Detective Antaramian gave the judge a “return on warrant” five days later stating under oath, “The warrant was not served due to new information coming forward.”

Police knew at this time that Grosskreutz had an extensive criminal history of arrests and convictions, the Kenosha County Eye noted.

Prosecutor: “So your interpretation of his intent is just a guess right?”

Richie: “He yelled f***k you and reached for the gun”
pic.twitter.com/qqrnMIgIYf