In announcing his opposition to the Democrat Party’s attempt to federalize all elections and kill the filibuster, West Virginia Democrat Sen. Joe Manchin very likely “saved the republic,” a blogger noted.

In a Sunday op-ed, Manchin wrote that “congressional action on federal voting rights legislation must be the result of both Democrats and Republicans coming together to find a pathway forward or we risk further dividing and destroying the republic we swore to protect and defend as elected officials.” 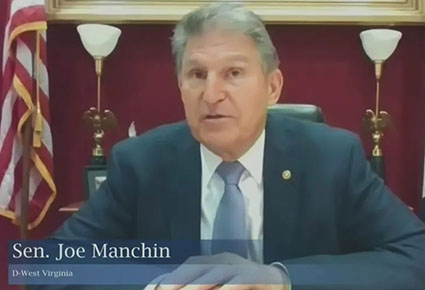 “This weekend, Joe Manchin said no to his party’s No. 1 legislative goal. This weekend, he became a Profile in Courage, which is when a senator stands up to the mob and does the right thing,” blogger Don Surber wrote on Monday.

Manchin “made a good argument that Democrats should not run roughshod over Senate rules, disable the filibuster, and pass an 800-page federal takeover of elections without a single Republican supporter,” Surber wrote.

Manchin also attacked the Democrats’ election bill, or For the People Act: “Yes, this process can be frustrating and slow. It will force compromises that are not always ideal. But consider the alternative. Do we really want to live in an America where one party can dictate and demand everything and anything it wants, whenever it wants? I have always said, ‘If I can’t go home and explain it, I can’t vote for it.’ And I cannot explain strictly partisan election reform or blowing up the Senate rules to expedite one party’s agenda.”

Democrats “want to empower a federal agency to control all elections in the United States,” Surber noted. “The rules promulgated by a bunch of Peter Strzoks will be so screwy that states will be required to elect minority governors and the like in the name of equity. In stopping this F– the People Act, Manchin will serve the nation well. Our heroes are not perfect.”

Manchin wrote in his op-ed: “I believe that partisan voting legislation will destroy the already weakening bonds of our democracy, and for that reason, I will vote against the For the People Act. Furthermore, I will not vote to weaken or eliminate the filibuster. For as long as I have the privilege of being your U.S. senator, I will fight to represent the people of West Virginia, to seek bipartisan compromise no matter how difficult and to develop the political bonds that end divisions and help unite the country we love.”

In 1863, West Virginia broke from Virginia “because it wanted to preserve a nation literally torn by partisan division by a Democrat Party determined to keep black men as slaves,” Surber noted. “In standing up to the F– the People Act, and standing up for the filibuster, Manchin made history on Sunday. He showed he was a West Virginian first, a Democrat second.”