In tracking the ruling establishment’s relentless promotion of death, the latest exotic topic is euthanasia, and as always the larger implications are ominous and not particularly well-concealed.

On Jan. 23, the website Bioedge detailed a ghoulish thesis by “bioethicist” Youann Della Croce advancing the cause of assisted suicide for prisoners: 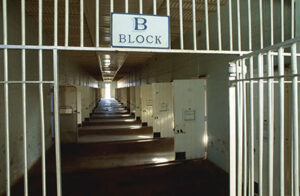 First, we have to distinguish between prisoners who are terminally ill and seeking to escape pain and prisoners who are suffering from “prison tedium.” If both are permitted for the free population, why not for prisoners? Della Croce contends that it is dehumanizing to refuse a request for assisted suicide. He argues if a bored prisoner claims to be suffering unbearably, he should be treated like everyone else in the jurisdiction:

“[Not to do so] is going down a dangerous slippery slope that ultimately leads to the dehumanization of inmates and failure to consider them as equal citizens, which, notwithstanding the content of some populist rhetoric, they remain….

“Prisoners are due equal respect in respect to their suffering and failing to acknowledge the seriousness of their pain on the ground that they have committed criminal acts is tantamount to treating them as second-class citizens to whom we owe less respect and concern than the law-abiding citizen.”

Amazingly, the right of bored prisoners to execute themselves is being justified by a technocrat graced with the shiny title of “bioethicist” on the grounds that this is already a firmly grounded right for regular citizens.

See what they did there?

Once upon a time, euthanasia enthusiasts resorted to quaint comparisons of the “anguished” existence of free civilians suffering from any number of problems that come with being human to “living in a form of personal prison with no hope of parole.”

That argument has become so overwhelmingly successful in society at large that it is now being applied to actual prisoners.

All those people walking around free beyond the prison yard have a confirmed right to end their mental suffering whenever they like! The incarcerated deserve the same rights as well!

What immediately comes to mind is a point long argued by proponents of capital punishment – that life in prison is in fact a far more cruel and inhumane sentence than execution.

No one will deny that those locked away in prison for decades will experience much anguish.

British journalist Martin Banks, writing in The Brussels Times in 2015, provides some background:

The two highly media covered cases of Farid Bamouhammad and Van den Bleeken, put the Belgian euthanasia legislation on the spotlight worldwide. Besides raising several moral and ethical questions, it also puts focus on the very function of our prison system and punishment.

For one, under the new Belgian legislation, the right for assisted suicide has become less strict to include mental anguish, intense physical or mental distress deemed unfixable, in addition to terminal illnesses. Although it is still a grey zone and a matter of psychological pathology or semantics, the number of applications has risen considerably.

In Bamouhammad’s case, the consideration to apply for euthanasia followed the period of solitary isolation. For other inmates who have been given sentences that will never see them getting out of prison, the very nature of their punishment and prospect of spending the rest of their lives in prison, may give rise to mental anguish. Should they have the right to apply for euthanasia as free citizens in such cases?

Australian “humanist” and rabid euthanasia advocate Philip Nitschke jumped on this very angle of approach to demand that prisoners be granted the right to end their own lives in a 2014 opinion piece for UK newspaper The Guardian:

Under the Belgian model, physical or psychological suffering that is incurable or constant can be the grounds for voluntary euthanasia. What is there not to agree with? The Belgians’ progressive approach shifts the debate from the semantics of “terminal illness,” a definition that is notorious within medicine, to a focus upon a person’s quality of life, as experienced by them.

Martin Bryant began attempting suicide not long after he was sentenced. This is perhaps not surprising given his first eight months of incarceration were spent in solitary with no natural light. His attempts were increasingly desperate acts by a suffering man.

Imprisonment for life, with no hope of parole, is torture. I thought then and now that a modern civilized Australia should not be involved in torture, no matter the crimes of the prisoner. This is why Bryant, and others like him, should be allowed help to die.

Do you feel that slope getting more slippery? Prisoner discomfort is certainly an eye-catching argument in the realm of euthanasia, but it’s not hard to see the more dangerous normalization process being fortified here: that mental suffering, even “boredom,” is an inarguably justifiable reason for a human being to commit suicide.

This goes far beyond the jail cell, of course. And for the technocrats who have been driving the worldwide health bus since the coronavirus hype machine spun out of control in early 2020, that is the exactly the plan. They want us to despair; they want us to kill ourselves.

‘Bioethicist’ from the ‘Culture of Death’ weighs in on euthanasia rights for prisoners, WorldTribune.com