HBO’s Bill Maher is consistently the only late-night host who dares to say things that might offend the snowflakes in his mostly liberal audience. 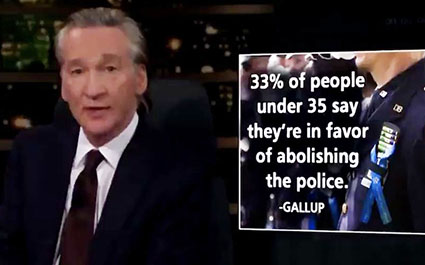 In his most recent broadcast, the “Real Time” host blasted millennials and other liberals for embracing “stupid” ideas while framing their critics as old or out of touch.

“You know why advertisers in this country love the 18 to 34 demographic? Because it’s the most gullible,” Maher said.

“Yeah. A third of people under 35 say they’re in favor of abolishing the police. Not defunding. But doing away with a police force altogether. Which is less of a policy position and more of a leg tattoo.

“So when you say, ‘You’re old, you don’t get it,’ get what? Abolish the police and the border patrol and capitalism and cancel Lincoln? No, I get it. Problem isn’t that I don’t get what you’re saying, or that I’m old. The problem is that your ideas are stupid.

“If you say, ‘Let’s eat in the bathroom and s**t in the kitchen,’ yeah, that’s a new idea. But I wouldn’t call it interior design.

“You think someone 80 is hopeless because they can’t use an iPhone? Maybe the one who’s hopeless is the one who can’t stop using it.

“You think I’m out of it because I’m not on Twitch? Well, maybe I get Twitch, but I just think people watching other people play video games is a waste of f***ing time.

“Twenty percent of Gen Z agree with the statement, ‘Society would be better off it all property was owned by the public and managed by the government’. And another 29 percent don’t know if that’s a good idea. Here’s who does know: Anyone who wasn’t born yesterday.”