Multi-billionaires Mark Zuckerberg of Facebook and Bill Gates are funding Black and Latino revolutionaries at an organization called FWD.us.

The pro-massive immigration group comfortably resorts to hostile racial “liberation” jargon straight out of the worst of 1960s radicalism.

Alida Garcia is VP of Advocacy at FWD.us. Flush with the belief that Joe Biden has captured the presidency, Garcia penned a Nov. 11 article for former junk bond king Michael Milken’s Milken Institute offering the ludicrous argument that “[o]ur economic recovery from the [Coronavirus] pandemic is entirely reliant on providing a pathway to citizenship for the 11 million undocumented people currently living in the U.S.” 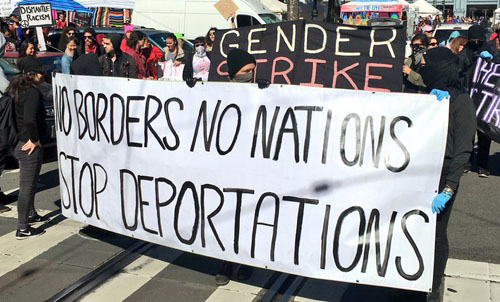 Garcia is a committed progressive activist but she knows how to scratch her benefactors where they itch. So she trotted out the “immigrants are good for GDP” line so beloved by supposed “free-market” enthusiasts keen on acquiring cheap pools of labor.

“We need individuals to be able to come to the U.S. to contribute across a wide array of industries and skill levels, helping to infuse our country with talent, creativity, and innovative energy from all over the world,” Garcia wrote.

As Breitbart’s Neil Munro correctly concluded, this was “an article that was written, posted, and touted by advocates for billionaires.”

Welcome to the Social Justice Struggle under a Swamp cronyist, graft-obsessed and thoroughly illegitimate Biden administration.

Barack Obama’s 2008 campaign manager David Plouffe is a member of the FWD.us Board of Directors.

Garcia has long identified herself with the radical Chicano Liberation movement. During her college days at Stanford, she was a member of MEChA, a student organization that lost funding after its racially obsessed platform was exposed. “For the race everything, for those outside, nothing,” the group’s foundational “El Plan Espiritual de Aztlán” document reads, the Stanford Review reported. “Self-Defense against the occupying forces of the oppressors at every school, every available man, woman, and child,” it goes on to say.

Surely Garcia has matured and mellowed since then after helping elect Barack Obama and Kamala Harris to prominent office, you ask? Think again.

In August 2019, she responded to a tweet by President Trump by quoting at length from a poem by a Chicano radical who led a movement that engaged in a gun battle with Denver police in the 1970s.

Here are some of the passages Garcia quoted from “I Am Joaquin”:

“In the fierce heat of racial hatred.
And now the trumpet sounds,
The music of the people stirs the
Revolution.
Like a sleeping giant it slowly
Rears its head”

“I shed tears of sorrow. I sow seeds of hate.”

“My blood is pure”

Lovely gal. Here’s a picture of her posing with Barack Obama and Joe Biden.

In 1967, Gonzales founded the “Crusade for Justice.” The violence and intolerance preached in his autobiography manifested itself in the organization. Members of competing organizations were violently attacked by Gonzales’s thugs. On March 17, 1973, a gun battle erupted with Denver police that ended when explosives stored in the building occupied by the Crusade for Justice detonated – blowing a second floor wall into the street. One person was killed and 17 people were injured. Gonzales’ goal was to build a large organization and in collaboration with other militant Chicano groups, reclaim the southwest US for Mexico – which they call Aztlan – or else make it a Spanish state within the US.

Garcia has frequently given vent to her deep-seated antagonism to what she sees as the rampant “white supremacy” and “white nationalism” that motivates Americans who support secure borders and the enforcement of our nation’s immigration laws.

In 2016 she tweeted an emotional “You are not illegal,” “you are here to stay,” and “your home is your decision” rant on the issue that is essentially a call for no borders:

#ToImmigrantsWithLove: We've been here before. We can do this again. You are not illegal. You are #HeretoStay. You are loved. pic.twitter.com/lF5SBhghUp

This is racist & disgusting & leveraging a white nationalist agency to service an electoral strategy. And it won't work.https://t.co/HdTbL0uLN4

This is fully in keeping with the FWD.us party line. Check out the organization’s official Twitter account. This is how they talk about DACA:

“The battle for Black liberation and immigrant justice championed on our streets today, shows us that when we recognize ourselves in each other and fight together against institutionalized white supremacy, in all its ugly shapes, injustice tears at the seams.”

"…institutionalized white supremacy, in all its ugly shapes, injustice tears at the seams. We are at the edge of possibility, and are called to take courageous action." — Luis #HomeIsHere #DACA #SCOTUS

Garcia is also on the Board of Directors for Harry Belafonte’s radical Black Liberation group “Gathering For Justice.” Belafonte has long and extensive communist ties.

Our work includes leading policy initiatives for police accountability; bringing in individuals and groups from diverse communities to organize as a “family coalition” in order to capitalize on our combined power and build the agenda for sustained black and brown liberation.

On Nov. 2, the eve of the presidential election, Belafonte was allowed to present a hysterical anti-Trump screed in The New York Times in which he declared that “this president has stood behind those police who kill us in the streets and by the armies of white supremacy who march by night and scheme in the light of day.”

Belafonte urged his black “brothers” to listen to “what [Trump] says when he is ‘alone in the room’ with his white supporters, promising them at his rallies that if he is re-elected, people of color will not invade their ‘beautiful suburbs’ from our ‘disgusting cities.'”

The New York Times is owned by Mexican multibillionaire Carlos Slim. Like Gates and Zuckerberg and their contributing fellow wealthy elites at FWD.us, Slim is giving these racial revolutionaries a prominent platform for a very good reason. By stirring up division and strife, our would-be globalist overlords hope to weaken and destroy the American nation state and consolidate their already-massive power in a borderless, fully homogenized world order.