Joe Biden has been in the basement and off the campaign trail for a third of the month in September.

The Democrat candidate’s handlers also put a “lid” on his campaign activities, stopping them at noon or earlier, 7 times in 14 days. 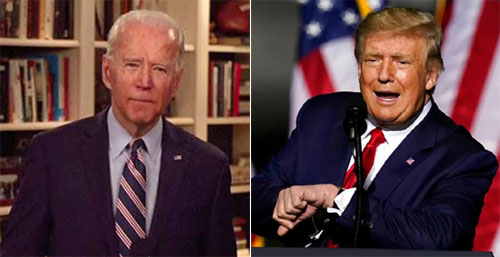 No Things Considered host Tim Young tweeted on Sept. 26: “Joe Biden called a lid AGAIN today! That’s 7 TIMES IN 14 DAYS! He spent 47 years in politics – if you think he needs multiple FULL DAYS to prepare for a debate, I’ve got a bridge to sell you. He’s physically and mentally the weakest Presidential candidate in American history.”

JT Lewis, school safety advocate and @teamtrump member, tweeted on Saturday: “Today President Trump is traveling to 3 states and nominating a THIRD person to the Supreme Court. Joe Biden called a lid before 10am.”

Trump told a massive crowd in Newport News, Virginia on Friday night that while “Sleepy Joe” hangs out in his basement, Trump powers through jam-packed days of events.

“I got a guy, he stays in his basement all day long and I’m doing this,” Trump said during the hour-long speech, which followed earlier Friday campaign events in Miami, Atlanta and Washington, D.C.

“How can we have Joe Biden representing this country? And you know he’s on the lid, you know the lid right? The lid is when they say, ‘We’re gonna put a lid on it,’ ” Trump explained. “It’s an expression. And every day early in the morning, they say, ‘Joe, I mean Joe Biden, Sleepy Joe, he’s put a lid on it. Sir, Biden has put a lid on it. What does that mean?’ That means he’s not working today.

“This guy takes four days off. You have to have a president that’s gonna work his ass off for this country. You need a very energetic president.”

Former House Speaker Newt Gingrich also drew a comparison between Biden’s campaign and the rigors of actually serving as president, saying after Biden’s last press lid, “You can ‘throw a lid’ on campaigning for seven out of 14 days but if you become president you can’t ‘throw a lid’ on being president for even one hour. What does the 50 percent absenteeism Biden schedule tell us about his ability to actually be president?”