PARIS — Sadly, we have seen this movie before. In the Spring of 1975, the collapse of South Vietnam coming to crescendo with the fall of Saigon indelibly marking a generation.

Cities like Pleiku, Danang and Hue in this contemporary saga are Kunduz, Kandahar and Herat.  Now with the Taliban’s stunning success over the beleaguered and ineffective Afghan Army, the same tragic fate awaits Afghanistan as the Taliban captured Kabul.

“Afghanistan is spinning out of control,” warned UN Secretary General Antonio Guterres. He added, “Humanitarian needs are growing by the hour.” 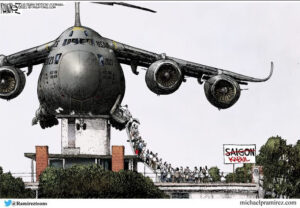 America’s frustrating twenty-year military commitment in Afghanistan was coming to an end in any event.  It was certainly time to go, and both sides of the political aisle in Washington realized this.

Yet, it was the Biden Administration’s original tone-deaf policy to plan completing the pullout on September 11th, the 20th anniversary of the most hideous Islamic terrorist attack on the USA.

This timing signaled weakness and an almost comic understanding of the war we were fighting and where 2,300 American were killed and 20,000 injured.

The pullout of remaining U.S. troops and over 8,000 NATO forces from France, Italy and Germany, created a gaping political power vacuum.  Significantly the move psychologically  demoralized the Afghan army almost immediately. The Taliban filled the void with lightning efficiency.

American political policy in Afghanistan has been a mix of muddled mediocrity, lubricated with billions of dollars in misspent largesse and great expectations which exceed the cost of the post-WWII Marshall Plan to rebuild devastated Europe!

Now the drama has turned full circle has reached its crescendo with the fall of Kabul.

The U.S. military’s pullout from the strategic Bagram airbase some weeks ago, allowed this military hub filled with so much new U.S. equipment, to fall first into the hands of looters then an indifferent Afghan garrison.

The move telegraphed reckless stupidity to the Taliban fighters.

Yet news of this chaos in Afghanistan has been tempered by the faux strategic sagacity of President Joe Biden who weeks ago expressed confidence in the Afghan military being able to defend the war-torn country.  But as the Taliban reached the gates of Kabul, a shaken Secretary of State Antony Blinken conceded that the collapse “has happened more quickly than we anticipated.”

Clearly this was not a rout of the American military but a tragic collapse of its Afghan proxy.

It’s not that the Taliban Islamic militants are really so tough; nor that the Afghan side lacks training or armaments, but sadly the motivation and willingness to fight.

Taliban, harbingers of a medieval ideology and theocratic regime, had the momentum to victory.

Now our task was to secure and evacuate personnel from the sprawling U.S. Embassy without evoking haunting scenes of Saigon 1975.

Grim scenes of the Kabul chaos are juxtaposed with the President’s delusional sanctimonious malarkey.

We never grasped the truism that Afghanistan remains a tribal and ethnic quilt of peoples who see sovereignty resting in their particular province or valley and bound often by warlords and fundamentalist Islam.

Trying to create a secular and internationally respectable state promoting elections, tolerance, and women’s rights while clearly a noble concept and probably embraced by a significant minority in urban centers such as Kabul, became Quixotic at best.

The French daily Le Figaro headlined, “Afghanistan; The Routing of the West.”

Renaud Giraud opined, “Europe will pay for the inconsistency of the United States in Afghanistan.”

The ousted Afghan government in Kabul can at best be seen as largely incompetent and corrupt clowns. Clearly a Taliban victory signals a victory of Islamic extremism. It evokes the humiliation of the U.S. by forces which cannot be grasped by Washington think tanks or woke Leftist media.

A return of an Al Qaida terrorist network is almost assured.

The UN’s Guterres warned, “The international community must unite to make sure that Afghanistan is never again used as a platform or safe haven for terrorist organizations.”

The fall of Kabul and the creation of the Islamic Emirate of Afghanistan presents a starkly stunning geopolitical setback for the United States’ standing and global credibility.