Remember Michael Dukakis? Democrats would like you to forget the 1988 disaster, but the polling in that year’s presidential election was reminiscent of the current 2020 polls. 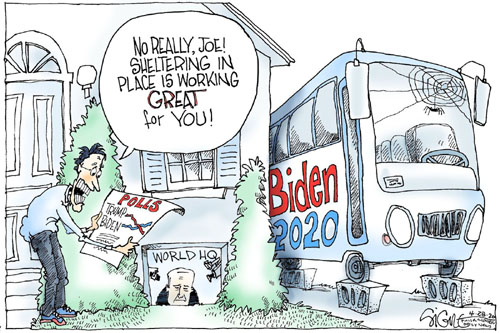 After numerous gaffes by Dukakis down the stretch (the tank photo being one), Bush won 40 states. Bush won 426 electoral votes to Dukakis’s 111.

Recent polling shows Joe Biden with a double-digit lead over President Donald Trump, including leads in Florida and several other battleground states.

Dukakis himself has warned Biden about polls.

“Particularly this year, [polls] should be studied cautiously,” Dukakis told the Boston Globe on July 3. “Biden can and should win, but being at 50, no matter how weak your opponent is, is no guarantee of success. I think I dropped eight points in the week Reagan called me ‘the invalid.’ I never took those early polls seriously.”

There are some major differences in 2020, however. Biden is shielded by allies in the major media. When he does emerge from his basement to read notes prepared by his handlers, he does not take questions and the media let him get away with it.

You would think that Democrats and their media allies won’t be able to hide Biden away for the duration of the 2020 campaign. But they are certainly trying.

Some observers were even saying that if Trump wanted to debate Biden, the president would have to break into the Delaware basement of the man he calls “Sleepy Joe.”

It was announced on July 28 that Case Western Reserve University and the Cleveland Clinic are teaming up to host the first presidential debate on Sept. 29 after the University of Notre Dame in Indiana bowed out because of concerns about the coronavirus pandemic.

If the debate does indeed take place, Trump should get his first real chance to challenge Biden. Thus far, the Democrat candidate has been nothing more than an empty vessel reading from a teleprompter or prepared notes from a notebook.

In fact, socialists and other leftists have boasted about how easily pliable to their agenda Biden is.

Angela Davis, a well-known Marxist and former Communist Party member, said she is supporting Biden because it will be easy for leftists to manipulate him.

Trump is depicting Biden as weak on crime following a recent surge in violent crimes across the country. The president’s re-election campaign released a July 21 TV ad suggesting a Biden presidency would result in 911 phone calls from senior citizens going unanswered.

Black Lives Matter Marxists have also seen how easily manipulated Biden is. In a recent interview, Biden indicated his support for the BLM effort to defund police.

Preventing Biden from taking questions when he does emerge from his basement, also allows Democrats to keep Biden from having to answer for sexual assault charges leveled against him.

Then there is Biden’s role in the plot against the Trump campaign and Gen. Michael Flynn.

In a June 29 op-ed for Fox News, Liz Peek noted that it turns out “Joe Biden may have been a critical player in the plot to frame retired three-star Gen. Michael Flynn. But don’t expect reporters to ask him about it. They can’t. He has occasionally read scripted remarks off a teleprompter, and he has sometimes spoken with local media hosts. But he has refused to answer questions, even from a largely supportive press.”

Peek continued: “His managers want him incommunicado; they know that any time Biden opens his mouth he could destroy his chances of unseating Trump. It seems unimaginable that Americans will elect a man who is afraid to speak to them. They may hate Trump, and they may blame him for the nation’s troubles, but can they actually vote for a candidate unable to hold his own in public?”

Tim Murtaugh, director of communications for the Trump re-election campaign, said Saturday in an interview conducted 100 days from Election Day, that the polls are actively trying to suppress Trump voter enthusiasm.

“They are trying to create a narrative, and these polls are designed — this is why they are released and published — they’re designed to create headlines, and they are actively trying to suppress the enthusiasm of President Trump’s voters,” Murtaugh told Sirius XM’s Breitbart News Saturday with host Breitbart News Political Editor Matthew Boyle.

“It’s evident that these polls are only designed to do that one thing that they’re aiming for,” he said.

Murtaugh pointed to two recent CNN and Quinnipiac polls, which had a sample of only 24 percent who identified as Republicans. “Twenty-four percent — less than a quarter of the country. That compares to Republican turnout according to exit polls in both 2016 and 2018 of 33 percent, so they’re undersampling Republicans by 9 points in that poll,” he said.

“They just no longer exist? They just wiped out more than a quarter of Republicans and said, ‘OK, here’s the poll.’ Well of course it shows that Joe Biden is ahead. But we know that there is enormous enthusiasm on the president’s side,” he added.