The watchdogs allege that tens of thousands of the ballots may have been manufactured and may be counterfeit. 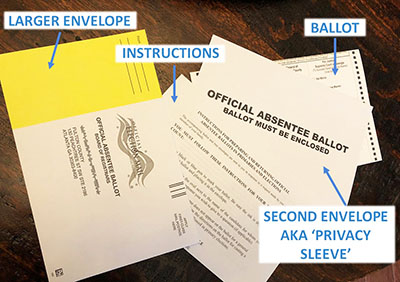 “We have what is almost surely major absentee-ballot fraud in Fulton County involving 10,000 to 20,000 probably false ballots,” said Garland Favorito, the lead petitioner in the case and a certified poll watcher who runs VoterGa.org, one of the leading advocates for election integrity in the state.

“We have confirmed that there are five pallets of shrink-wrapped ballots in a county warehouse,” Favorito said in an interview with RealClearInvestigations.

Superior Court Judge Brian Amero, who federal elections records show is a Democratic donor, on May 21 ordered Favorito and other petitioners to meet at the warehouse on May 28 to settle the terms of the inspection of the absentee ballots. But, on May 27, Fulton County filed a flurry of motions to dismiss the case, delaying the inspection indefinitely.

“We will be in court on June 21 to resolve these motions,” said Favorito, calling them another “roadblock” the county has tried to throw in their way. He expects talks over the logistics of the inspection to resume after the Fourth of July holiday.

As part of his May 21 order, Amero requested officials guard the warehouse around the clock until an inspection date can be set. But just eight days later, a breach in security was reported after sheriff’s deputies left their post for a couple of hours.

“The front door was [found] unlocked and wide open in violation of the court order,” Favorito said.

Joe Biden reportedly won Georgia by less than 12,000 votes thanks to a late surge of mail-in ballots counted after election monitors were forced out of State Farm Arena in Atlanta.

RealClearInvestigations noted that Fulton County poll manager Suzi Voyles reported that as she sorted through a large stack of mail-in ballots in November she noticed an alarmingly odd pattern of uniformity in the markings for Biden.

“One after another, the absentee votes contained perfectly filled-in ovals for Biden — except that each of the darkened bubbles featured an identical white void inside them in the shape of a tiny crescent, indicating they’d been marked with toner ink instead of a pen or pencil,” the report noted.

Adding to suspicions, Voyles said she noticed that all of the ballots were printed on different stock paper than the others she handled as part of a statewide hand recount of the Nov. 3 presidential election. Voyles said none of the ballots were folded or creased, as she typically observed in mail-in ballots that had been removed from envelopes.

In short, the Biden votes looked like they’d been duplicated by a copying machine.

“All of them were strangely pristine,” said Voyles, who said she’d never seen anything like it in her 20 years monitoring elections in Fulton County, which includes much of Atlanta.

At least three other poll workers observed the same thing in stacks of absentee ballots for Biden processed by the county, and they have joined Voyles in swearing under penalty of perjury that they looked fake.