Answers he has received from the intelligence community in regards to his assertion that “spying” on the Trump campaign “did occur” are “just not jibing,” Attorney General William Barr said.

“Like many other people who are familiar with intelligence activities, I had a lot of questions about what was going on. I assumed when I went in, I would get answers, and I got no answers that are satisfactory and, in fact, probably have more questions and some of the facts I’ve learned don’t hang together with the official explanations of what happened,” Barr said in a interview released on May 31. 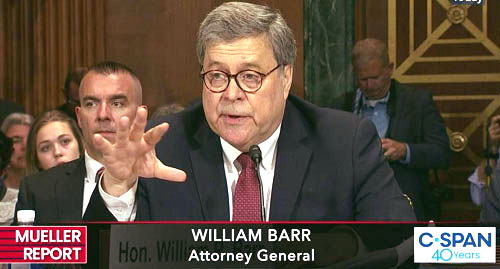 When asked to clarify, Barr said, “That’s all I really will say. Things are just not jibing.”

Special Counsel Robert Mueller “spent two and half years and the fact is there is no evidence of a conspiracy. So it was bogus, this whole idea that Trump was in cahoots with the Russians is bogus,” Barr said.

Barr said in April during a Senate hearing that he believed the Obama-led FBI did spy on Trump’s campaign.

“I think spying did occur. The question is whether it was adequately predicated,” he said. “I believe there is a basis for my concern.”

“We are exposing everything,” Trump said, noting that he wanted to make sure investigators are “able to see how and why this whole hoax started.”

“The Attorney General has also been delegated full and complete authority to declassify information pertaining to this investigation, in accordance with the long-established standards for handling classified information. Today’s action will help ensure that all Americans learn the truth about the events that occurred, and the actions that were taken, during the last presidential election and will restore confidence in our public institutions,” White House Press Secretary Sarah Sanders said in a statement.

Barr appointed U.S. Attorney from Connecticut John Durham to lead the investigation which will focus on the use of FBI informants as well as alleged improper issuance of Foreign Intelligence Surveillance Act (FISA) warrants.

Durham is expected to focus on “all intelligence collection activities” related to the Trump campaign for the period before Nov. 7, 2016.

Durham is also working with Justice Department Inspector General Michael Horowitz, who is currently reviewing allegations of FISA abuses and the role of FBI informants during the early stages of the Russia investigation. Horowitz is expected to wrap up his investigation next month.

Breitbart News reported on June 2 that “In an action characterized as ‘odd’ last year by then-Senate Judiciary Committee Chairman Chuck Grassley, Rice memorialized the confab in an email to herself describing Obama as starting ‘the conversation by stressing his continued commitment to ensuring that every aspect of this issue is handled by the Intelligence and law enforcement communities by the book.’ ”

Grassley, in a letter to Rice, commented: “It strikes us as odd that, among your activities in the final moments on the final day of the Obama administration, you would feel the need to send yourself such an unusual email purporting to document a conversation involving President Obama and his interactions with the FBI regarding the Trump/Russia investigation.”

An attorney for Rice responded to Grassley’s letter by saying Rice wrote the email to herself with the goal of “memorializ[ing] an important national security discussion,” since “President Obama and his national security team were justifiably concerned about potential risks to the Nation’s security from sharing highly classified information about Russia with certain members of the Trump transition team, particularly Lt. Gen. Michael Flynn.”

The attorney denied that the anti-Trump Steele dossier, financed by the Democratic National Committee and Hillary Clinton’s campaign, was discussed in the Oval Office meeting.

Grassley noted the unusual timing of the email sent by Rice to herself more than two weeks after the January 5, 2017 White House meeting on the Russia investigation, but mere hours before she vacated the White House for the incoming Trump administration.

The email, Grassley documented, was sent by Rice to herself on Trump’s inauguration day of January 20, 2017.

“If the timestamp is correct, you sent this email to yourself at 12:15 pm, presumably a very short time before you departed the White House for the last time,” Grassley wrote to Rice in a letter seeking clarification on a number of issues regarding the email and the Oval Office briefing at which Biden was documented as being present.

Regarding the time stamp on the email, the attorney said that noon was not accurate and that the email was sent in the morning “since Ambassador Rice departed the White House shortly before noon on January 20.”

Still, Rice waited two weeks after the meeting to memorialize the conversation and sent the memo as one of her final acts in the White House on the last day.

The attorney said that Rice waited until the last minute “because that was the first opportunity she had to do so, given the particularly intense responsibilities of the National Security Advisor during the remaining days of the Administration and transition.”

Meanwhile, as Biden’s possible role is being discussed, Barr, the attorney general, two weeks ago noted the intelligence community’s early handling of the Russia investigation may contain some red flags.

In an interview on Fox News, Barr stated: The thing that’s interesting about this is that this was handled at a very senior level of these departments. It wasn’t handled in the ordinary way that investigations or counterintelligence activities are conducted. It was sort of an ad hoc, small group — and most of these people are no longer with the FBI or the CIA or the other agencies involved. I think there’s a misconception out there that we know a lot about what happened. The fact of the matter is, Bob Mueller did not look at the government’s activities.