FBI Director James Comey opened the door, and now a slew of lawyers are lining up to walk in and get “the Clinton deal” for their clients who allegedly mishandled classified information.

Mark Zaid, a defense attorney for national security whistleblowers and people accused of mishandling secrets, says he plans to ask for “the Clinton deal” – and believes he probably can get it. 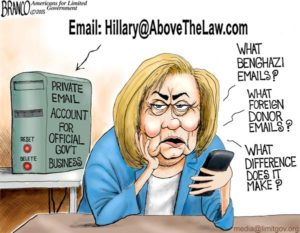 Zaid said the circumstances are similar to those of former CIA Director David Petraeus, who received a plea deal featuring probation and a fine for sharing highly classified information with his mistress. Zaid says he called the Justice Department on behalf of a client accused of taking classified records home.

“We absolutely got on the phone to the prosecutor and said, ‘We want the Petraeus sentence. We want the commensurate, parallel sentence.’ And we got it!” he said, winning a $5,000 fine and a short probation term instead of possible prison for a now-retired intelligence agency employee.

Zaid says if that case still were still pending, he probably could have gotten the client, who he refused to name and asked not be identified, the same deal as Hillary Clinton, as their “carelessness,” a term used by Comey to describe Clinton’s email practices, was similar.

“In some ways, [the Clinton and Petraeus cases] now create a glass ceiling and a glass floor,” Zaid says. “By Comey’s wording [about Clinton], now we have a floor as to what constitutes intent that deserves prosecution.”

Zaid said that one line in Comey’s announcement that no charges would be field against Clinton may become more significant with time.

Brezler used a personal email account to send a classified report about an alleged child-raping, drug-dealing Afghan police official to a fellow Marine as a warning, two weeks before one of the man’s apparent rape victims murdered three Marines. He reportedly knew the document was classified, but felt its status may have changed with time.

Bowe intends to argue that Brezler deserves leniency and that his recommended punishment is arbitrary and capricious, particularly in light of Clinton’s conduct. He expects a ruling this fall.

“We intend to cite the treatment of Secretary Clinton as one of the many – and most egregious – examples of how the severe treatment of Maj. Brezler was the very definition of an arbitrary and capricious double standard,” Bowe says.

He adds: “It is impossible to reconcile the commander-in chief’s statement [in April] that Secretary Clinton’s intentional act of setting up a secret, unsecured server on which rested the most sensitive classified information did not ‘detract from her excellent ability to carry out her duties’ with the completely opposite finding for Maj. Brezler based on an allegedly inadvertent mistake involving infinitely less sensitive and limited information.”

Other recent cases involving classified information include the conviction and imprisonment of former CIA officer John Kiriakou, who gave contact information for a CIA employee to a reporter. He pleaded guilty in 2012 to violating the Intelligence Identities Protection Act and spent nearly two years behind bars.

Former Naval reservist Bryan Nishimura pleaded guilty last year to unauthorized removal and retention of classified materials, receiving a $7,500 fine. His lawyer, William Portanova, said he was a “pack rat” who did not mean to break the law.

Arabic translator James Hitselberger was fired and criminally charged for printing two classified documents and attempting to leave a Bahrain naval base. He pleaded guilty in 2014 to unauthorized removal and retention of classified documents to spare himself a potentially lengthy prison sentence, maintaining he was innocent of purposeful wrongdoing. Hitselberger offered an explanation similar to Clinton’s justification for using a person email server: convenience. He wanted to read the documents at home.

Attorneys will ask for ‘the Clinton deal’ for others who mishandled classified info, David Petraeus, James Comey, WorldTribune.com