One of several strategic actions taken by the major media, including Fox News, on election night was calling Arizona for Joe Biden while at least 1 million ballots had yet to be counted. Critics charged it was a partisan move, outrageous on its face, that violated standards applied to other states. 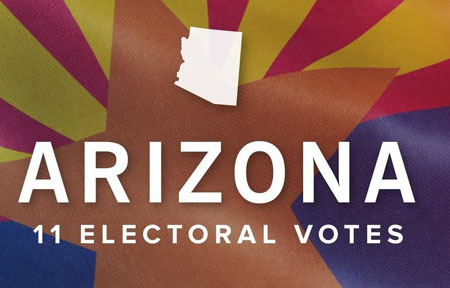 ABC News has since pulled back its call for Biden and many campaign officials, analysts and independent media called on The Associated Press and Fox News to do the same.

Trump campaign senior adviser Jason Miller tweeted that President Donald Trump “is on pace to win Arizona. I would also point out that even Nate Silver came forward and said he thought Fox News and AP should rescind their calling of the state.”

Tim Murtaugh, director of communications for the Trump campaign, tweeted: “The guy who called Arizona for Fox News donated to Obama/Biden in 2008. Fox News (and the AP) should RESCIND their call of Arizona for Biden. @realDonaldTrump will WIN ARIZONA and be re-elected.”

According to the Trump war room, the “guy” is Arnon Mishkin, “who voted for Hillary Clinton in 2016 and donated to Obama/Biden in 2008. He’s the one who called Arizona for Biden prematurely. RESCIND!”

CNN even admitted on air that Trump was tracking to win Arizona if the momentum continued with the new ballot drops.

Arizona officials said on Wednesday that the final results would not be available for “several days.”

As Maricopa County released the results from 140,000 more ballots on Wednesday night and Thursday morning, Trump “received almost the exact share he would need to charge back to win Arizona’s 11 electoral votes and potentially re-election,” AZ Central reported.

Phoenix-based Data Orbital, a data analytics and survey research firm based in Arizona’s capital, predicted that the number of outstanding ballots across the state would give Trump the edge over Biden and Arizona’s 11 electoral votes.

According to a report from The Hill, as of Wednesday morning, “only 86 percent of the state’s votes have been counted, versus 98 percent” that was previously reported.

It was discovered that Edison Research data, which major news organizations including The New York Times utilize to report voting results, was responsible for reporting that 98 of precincts in Arizona had been counted when in fact only 86 percent had been counted.

Meanwhile, a large pro-Trump rally was taking place at the Maricopa County Elections Center where Arizona Rep. Paul Gosar said he had been denied entry.

“The president had our backs. Now we have his. Count all votes. Patriots meet now. State Capitol. By the liberty bell,” Gosar tweeted.