In announcing the U.S. would halt its imports of Russian oil, Joe Biden on Tuesday said he had “strong” bipartisan support, as well as the support of the American public.

Biden’s announcement came as the average price of a gallon of gas in the U.S. hit a record high of $4.17. 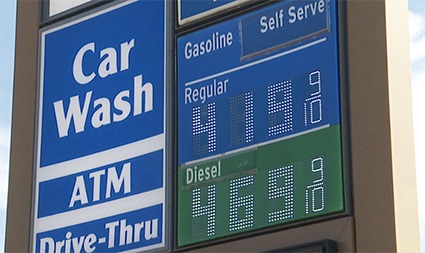 And that record is likely to be broken many times.

The Kremlin warned of “catastrophic consequences” for Western nations who halted their imports of Russian oil.

Russia has threatened to close a major gas pipeline to Germany and warned of $300 oil prices if the West goes ahead with a ban on its energy exports.

“It is absolutely clear that a rejection of Russian oil would lead to catastrophic consequences for the global market,” Russian Deputy Prime Minister Alexander Novak said Monday in an address on state television. “The surge in prices would be unpredictable. It would be $300 per barrel if not more.”

Russia is the world’s third-largest oil producer, behind the U.S. and Saudi Arabia, and the world’s largest exporter of crude to global markets. It is also a major producer and exporter of natural gas.

Politicians in the West “need to honestly warn their citizens and consumers what to expect,” Novak said. “If you want to reject energy supplies from Russia, go ahead. We are ready for it. We know where we could redirect the volumes to.”

Biden on Tuesday noted that the U.S. has provided more than $41 billion in security assistance to Ukraine, and that shipments of defensive weapons are arriving in the country every day from the U.S.

Biden also said that the U.S. “will share the responsibility of caring for the refugees, so the costs do not fall entirely on the European countries bordering Ukraine.”