Rush Limbaugh, who announced Monday that he has advanced-stage lung cancer, grew visibly emotional when he was presented the Presidential Medal of Freedom at Tuesday’s State of the Union Address. 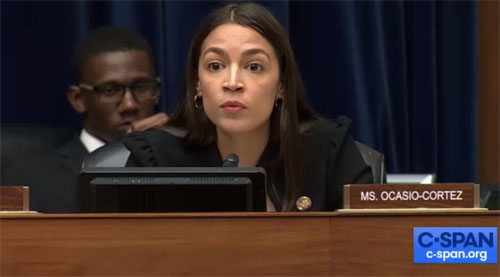 “Rush Limbaugh is a virulent racist,” AOC said in an Instagram video on Tuesday.

“Also him pretending to be surprised was such a joke,” she continued.

“This has been news all day, there have been multiple reports from multiple outlets, saying that Rush Limbaugh was going to receive the Medal of Freedom, and then Trump announced it and he had to pretend like this was some kind of Oprah moment,” Ocasio-Cortez said.

Ocasio-Cortez, who skipped President Donald Trump’s address in protest of the president and his policies, said giving the medal to Limbaugh was “red meat to his base.”

“He wants to assert that Rush Limbaugh is somehow on the same level as Rosa Parks. And it’s truly nauseating,” she said. “And this is one of the many reasons that I did not go.”

“AOC mocks Rush Limbaugh, who has stage 4 lung cancer. Disgusting! We the People, reject your politics of socialism, division & hate,” Murray tweeted, adding “You are the “red meat to your base” & are on the wrong side of history. #Congratulations on your Presidential Medal of Freedom @RushLimbaughEIB.”

Limbaugh stunned his 20-million member audience Monday with the announcement he’s been diagnosed with “advanced lung cancer.” He told listeners that the disease will keep him off the air on certain days when he’ll receive treatment.

Trump responded by inviting the conservative icon to the Tuesday address, where first lady Melania Trump then presented the medal and placed the award on Limbaugh – who was visibly emotional.

AOC was not the only leftist to criticize Limbaugh on Tuesday.

Acosta said: “Yes, the president had some heartwarming moments during this speech, but he was also engaging in some deeply divisive rhetoric aimed at immigrants, aimed at Latinos. And while, yes, he was trying to make appeals to the African-American community, it can’t be forgotten he was awarding the Medal of Freedom to Rush Limbaugh, who has a history of making derogatory comments about African-Americans. And so I think, you know, overall it’s a wash.”

Snerdley tweeted: “I just saw the footage from CNN’s Jim Acosta saying Rush has a “history” of saying disparaging things about African Americans. I have been in the studio with Rush for 30 years. I would like to formally challenge CNN and @Acosta to provide the list.”

Snerdley then engaged with other angry leftists on Twitter, who continue to accuse Limbaugh of being a racist without offering facts to back up their claims.

“I saw this so-called “list” Distortions, out of context, and fabrications – based on editing phrases out of context. Not even worth addressing. Not from a serious or truthful source. Next?” Snerdley tweeted.

He later added: “For all of you liberal haters who keep rolling out this racial BS. I could share stories of Rush’s interactions with people of ALL races/sexual orientations/ etc. He is a KIND, DECENT, RESPECTFUL, GENEROUS, AND LOVING MAN. You know media lies. I know RUSH.”