Throw another $2 trillion on the fire. It’s only taxpayer dollars.

Analysts are saying that the budget proposals Democrats plan to ram through Congress via reconciliation will cost up to $5.5 trillion and draw heavily on deficit spending. 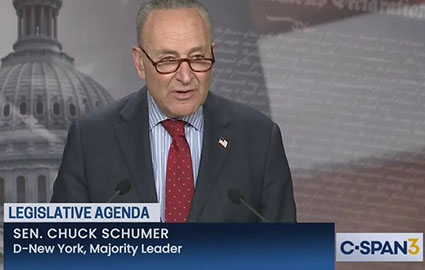 Democrats have put the price tag to taxpayers for their proposal, which incorporates portions of Joe Biden’s American Families Plan and American Jobs Plan, at $3.5 trillion.

The Committee for a Responsible Budget explained reasons for skepticism about the Democrats’ projections:

“While the actual cost of this new legislation will ultimately depend heavily on details that have yet to be revealed, we estimate the policies under consideration could cost between $5 trillion and $5.5 trillion over a decade, assuming they are made permanent. In order to fit these proposals within a $3.5 trillion budget target, lawmakers apparently intend to have some policies expire before the end of the ten-year budget window, using this oft-criticized budget gimmick to hide their true cost.”

The Daily Wire noted in a Sunday report that among the largest expenses in the budget are the extended child tax credit, community-based health services, clean energy and vehicle tax incentives, funding for higher education, and affordable housing investments — which amount to $1.1 trillion, $400 billion, $330 billion, $285 billion, and $190 billion respectively.

“The government collects real resources via voluntary transactions with economic agents who are willing to trade real resources today for the promise of real resources in the future. Debt buyers, including U.S. households saving for retirement, view this debt as savings, which reduces their savings in private investment. This substitution is called the ‘capital crowding-out effect’ from government debt issuance.”