Dr. Anthony Fauci is warning that the Omicron variant of Covid is upon us and soon hospitals may be overwhelmed by the unvaccinated.

Omicron may very well be Fauci’s “last stand,” blogger James Howard Kuntsler noted in a Dec. 17 analysis that assumes that America’s best-paid bureaucrat is calling the shots rather than acting at the behest of an unidentified upline about which media types are not curious in the least. 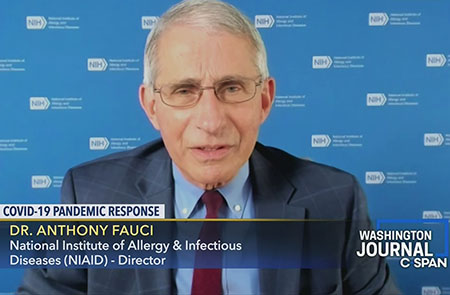 “The question is: will the people of this land submit to continued coercion and to the engineered demolition of their lives?” Kuntsler asked.

“So far, we have not rolled over like the pathetically servile Europeans and Australians. Here, there is apparently some will to resist further pushing around by this demonic elite. Several federal judges recently defined clear constitutional red-lines in their published decisions against the vaxx mandates.”

Actual scientists say that Omicron is a mild variant and may well lead to the end of the pandemic.

Kuntsler argued that the gravest threat to the public health of Americans is media darling “Fauci and his debauchery of medical science. This will surely come as a surprise to readers of The New York Times, who see in the two-year (so far) Covid-19 event a splendid opportunity to hasten the destruction of the US economy and our culture in order to consolidate their own power to coerce and control the population. Clear the offices! Shut down the social spaces! Make ordinary business as difficult as possible! Cancel Christmas!”

Fauci “is likely responsible for a preponderance of the total 802,000 U.S. Covid deaths — putting aside the number of people who actually died from highway accidents, cancer, diabetes, old age, and other causes, but were listed as Covid deaths by hospital accounting personnel avid for federal subsidy cash,” Kuntsler wrote.

Again there are a significant number of very powerful individuals with a vested interest in Fauci’s success at appearing to validate a panic syndrome that has paralyzed the globe and ceded power to tyrants at all levels here and abroad.

Kuntsler continued: “It was Dr. Fauci who organized the suppression of easily marshaled and inexpensive early treatments for the disease, namely hydroxychloroquine, ivermectin, fluvoxamine, budesonide, azithromycin, monoclonal antibodies, Vitamin D, etc. It was Dr. Fauci who promoted the protocol of sending sick patients home from the ER without any treatment to await the further development of fatal clotting in their lungs. It was Dr. Fauci who designated the drug remdesivir — which he developed years ago for hepatitis-C (it did not work) with a financial stake in the patents — as the primary inpatient treatment for Covid-19. And then it turned out that remdesivir destroys patients’ kidneys and is ineffective anyway in late treatment of the disease when viral loads wane and spike proteins have already created the fatal capillary clots in the alveoli of the lungs and in other organs.

“It’s Dr. Fauci who is responsible for the emergency use authorization on the mRNA ‘vaccines’ that may have killed hundreds of thousands more Americans — based on the CDC’s VAERS system and statistical analysis of its inherent under-reporting at only 2.2 percent of all actual events— and you can add multiples more in non-fatal adverse reactions, including permanent disabilities. It’s Dr. Fauci who finagled the inadequate and botched trials of the mRNA vaccines in order to rush them into use. And now it’s Dr. Fauci who wants to vaxx up all the children in America, despite evidence that the mRNA shots permanently disable children’s innate natural immune systems and can cause lasting heart, blood vessel, brain, and reproductive damage, and also despite the fact that few children are susceptible to serious Covid illness in the first place.”

Fauci’s Omicron moment “may be the power-mad little weasel’s last stand,” Kuntsler added. “Reports so far indicate that omicron is a mild form of the virus. The one death reported to date did not include any information about the patient’s co-morbidities. For all we know, it was a motorcycle wreck with an Omicron-positive label slapped on.”

Kuntsler concluded: “Plenty of ordinary citizens are furious over the insidious and insane incursions of the political Wokery hitched to the Covid emergency — the race and gender hustles, the efforts to rig elections, the absurd spending programs aimed at countless grifting operations, the disastrous monetary inflation, and the invasion of opportunists from all over the world across our border with Mexico. Even at Christmas time, with all its transient preoccupations, it’s not too much to ask: where do you stand?”