Alexa knows best, according to its own poll which Alexa used to convince Americans to stop thinking 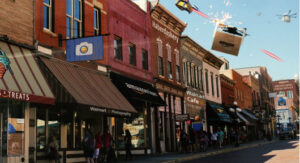 The entire country is reportedly looking forward to a glorious future in which all culture and economic activity in society is owned by one unstoppable, faceless, international corporation such as Walmart or Amazon.

This astounding report is the result of years of involuntary polling data performed by Amazon Alexa-powered smart speakers strategically placed in everyone’s homes and the data is incontrovertible: most Americans would eagerly adopt living in a society in which one company employs everyone, or at least structures and orders all the means of production, while simultaneously telling them what cultural values they should believe in and what they should be hyped to consume. …

“Yeah, having all these different stores competing against each other and all their different products and prices is confusing,” said Bob American to his wife one night while in the hearing radius of their interested Alexa smart speaker. “Wouldn’t life be so much easier if one company just ran everything, gave everyone jobs according to their skills, and told us what to buy and at what price?”

according to its own poll which Alexa used to convince Americans to stop thinking, Alexa knows best