After year of equivocation on BLM, corporate media reverses position for Capitol breach

The leftist corporate media’s coverage of the breach of the U.S. Capitol and its aftermath was a major departure from how it portrayed Black Lives Matter-led “peaceful protests” that ravaged American cities for much of 2020.

“At the time, many reporters, commentators and news organizations took pains to contextualize, rationalize and in some cases soften their coverage” of the BLM and Antifa-led burning and looting of U.S. cities, Daniel Payne noted in a Jan. 7 analysis for Just the News. 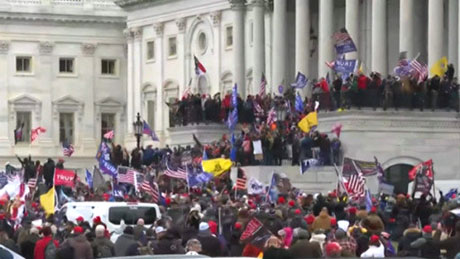 Nearly 20 people died in the civil unrest in the first two weeks of BLM/Antifa protests. They caused billions of dollars in damage to businesses, homes and other property, “turning some urban centers into fiery wastelands and sending business owners scrambling to fortify their shops against destruction,” Payne noted.

In early June, CNN personality Chris Cuomo argued at the time that protesters should not be expected to be “polite and peaceful” during their demonstrations.

“[P]lease, show me where it says protesters are supposed to be polite and peaceful,” he said at the time. “Because I can show you that outraged citizens are what made the country what she is and led to any major milestone. To be honest, this is not a tranquil time.”

In the midst of Wednesday’s breach of the Capitol, Cuomo appeared to have sharply changed his tune: “Those who stoked these flames must be remembered. They fed lies and moved people to exactly what we are seeing.”

“This is what you all pushed for,” Cuomo said, referring to Trump-aligned conservatives. “Stoked. Agitated. Deceived. So angry, all ‘us vs them’ … and this is where it led. As you all knew it might.” He further referred to the breach as “the low point in modern history.”

The Associated Press, meanwhile, appeared in its coverage of what transpired in D.C. to depart from a new stylistic approach it adopted last year, Payne pointed out.

Informing readers that it would be “us[ing] care” in describing civil unrest, the news organization in September wrote on Twitter: “A riot is a wild or violent disturbance of the peace involving a group of people. The term riot suggests uncontrolled chaos and pandemonium.”

The AP argued that “focusing on rioting and property destruction rather than underlying grievance has been used in the past to stigmatize broad swaths of people protesting against lynching, police brutality or for racial justice, going back to the urban uprisings of the 1960s.”

Suggesting an alternative, the AP wrote: “Unrest is a vaguer, milder and less emotional term for a condition of angry discontent and protest verging on revolt.”

The AP appeared to utilize that standard in its coverage of the BLM/Antifa violence, when in the late spring it described looting, arson, flag-burning and clashes with police as “unrest.” It similarly described as “unrest” sustained chaos in Minneapolis that involved the burning of a police station and multiple other buildings, some of which firefighters were unable to access due to ongoing violence.

“Yet the Associated Press in multiple stories this week described the Capitol crisis as a ‘riot,’ making it unclear just how the news service applies the standards it appears to have developed in the midst of the Black Lives Matter protests last year,” Payne noted.

Criticizing what he alleged was President Donald Trump’s culpability for the breach of the Capitol, Lemon addressed Trump as “the worst of the worst” and said: “Some day in the future that will be all anyone remembers of you, that you were awful, terrible, the worst president, and that you won by an electoral fluke and by lying to people. You are a complete and utter disgrace is what people will remember.”

On Twitter, meanwhile, Lemon wrote of the protests: “So much for [law and order].”

Yet Lemon during last year’s Black Lives Matter demonstrations, Lemon said: “Our country was started because [of] the Boston tea party. Rioting.”

In late May of 2020, after two nights of violence, arson and destruction in Minneapolis, “Today Show” personality Craig Melvin said the network would be refraining from calling the mayhem a “riot.”
“While the situation on the ground in Minneapolis is fluid, and there has been violence,” he wrote on Twitter, “it is most accurate at this time to describe what is happening there as ‘protests’ — not ‘riots.’ ”

On Thursday, the “Today Show” referred to the Capitol breach as a “riot.”