A poll conducted on Jan. 17 showed President Donald Trump had 87 percent support among Republicans, the same number he had in November.

After seemingly putting to rest rumors that he would form a new political party, Trump’s team has announced the formation of two organizations “that will help to frame the ideology of the Republican Party in terms friendly to Trump’s political movement,” a Jan. 31 Washington Times report noted. 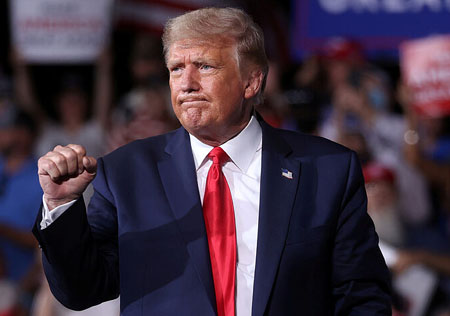 “A restoration is coming. Join us,” Vought wrote in The Federalist.

“I want to make sure that the Republican Party can grow and come back, and we’re going to need Trump and Trump needs us,” Graham said. “I think the best thing for us is to keep the Trump policy movement alive.”

Democrats are on high alert over Trump’s continuing influence. The House Democrats’ campaign arm last week sent a fundraising email, under the name of House Speaker Nancy Pelosi, warning of the threat posed by Trump.

“Donald Trump’s team just announced he’s sitting on a $70 MILLION war chest — and he plans to use every cent to elect pro-Trump Republicans up and down the ballot,” Pelosi stated.

Though still cut off from social media, Trump is handing out political endorsements via his new Save America political action committee. He has backed Kelli Ward for a second term as chairwoman of the Arizona Republican Party (she won) and former White House press secretary Sarah Huckabee Sanders for governor of Arkansas in 2022.

While Trump hasn’t decided whether to run for office again, “advisers say he is planning to lead an effort pushing state legislatures to reform election rules to limit mail-in balloting,” the Washington Times report noted.

“He understands that we have to get away from unsolicited vote-by-mail efforts and back to historical norms of in-person voting,” a former senior Trump administration official said.

Trump also created the “Office of the Former President,” staffed with former White House aides to “advance the interests of the United States and to carry on the agenda” of his administration.

Vought called Trump’s presidency “the first real counter assault to the Left in decades, by a champion who had the stomach and the strength to sustain the withering fire of his adversaries. This explains the lengths to which the Left went to destroy his presidency and his movement.”

“To those asking where we go from here, there must be one conclusion from the right: The counter assault must be sustained. There is no going back,” Vought wrote. “The call for unity must not become an excuse for surrender.”