Team Biden is about to dispatch the vaccine gestapo to your door. 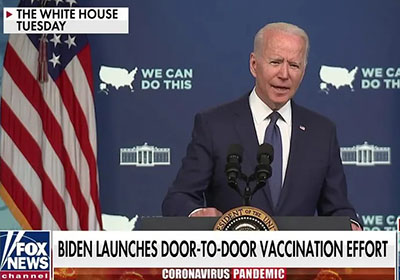 Biden on Tuesday pledged to send government operatives “door-to-door” to meet the overlords’ vaccination goal of 70 to 90 percent of the American population getting jabbed.

“We need to go community-by-community, neighborhood-by-neighborhood, and oft times door-to-door, literally knocking on doors” to get people vaccinated, Biden said.

How will Team Biden know exactly which doors to send its operatives to?

Medical records are allegedly private and polls and surveys are anonymous, so where would the federal government get this information from?

“Moreover, if there is a national vaccination database, where is this information stored and who oversees it?” Kelly Sadler noted in a July 6 analysis for The Washington Times. “Could it be hacked? How is it protected from both foreign and domestic adversaries?”

How will Team Biden be able to distinguish between those with legitimate health concerns of getting the jab, those who are just reluctant to get it, and those who had Covid and have natural antibodies?

Or, Sadler wrote, “will it be random? Democrat operatives moving into pesky red states and communities that voted for Donald J. Trump, so they can preach directly to the deplorables about the error of their way and pressure them to get the shot?”

“Perhaps it was a senile moment,” where Biden “went off script, and undermined the actual policies of his administration,” Sadler noted. “Biden certainly has had many of them. But perhaps, just perhaps, it was an indication of something more sinister, which will only discourage Americans skeptical of receiving a shot to get one.”