A closer look at ‘reporting’ on virus deaths: Exclamation points and wrong facts

USA Today, in a typically dishonest covid report a few days ago, blared: “As the outbreak continues to surge across the southern states, Florida, Texas and South Carolina set records for new daily deaths, reporting 156, 129 and 69, respectively.” 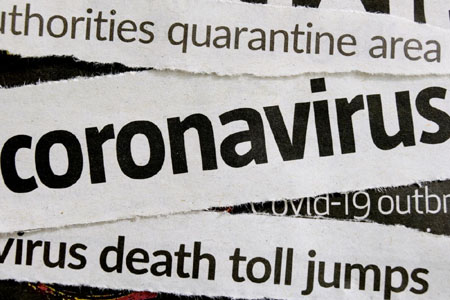 The problem is that those numbers were cumulative reports made on a certain day. Thus they misrepresented that day’s death totals.

On a daily basis the corporate media feed us the news of covid deaths reaching record highs. But, the big surge is a “media-fed myth,” said the Issues & Insights editorial board.

“It’s a scary prospect. But the truth is the mainstream press is grossly misleading the public by misreporting the death counts,” the editorial board noted on July 22.

PBS in Arizona reported that the state on July 19 set a record for coronavirus-related deaths reported in one day, with 147, according to the Arizona Department of Health Services.

The PBS report “is particularly illuminating because the website the PBS article links to includes a chart of daily deaths in the state. It lists only six deaths on July 19. What’s more, the chart shows that there have only been two days where deaths exceeded 65,” Issues & Insights noted.

“So where did that scary 147 number come from? The same place all the other ‘surging’ numbers come from. Each day Arizona and other states file reports on how many people died from COVID-19. It’s not a measure of how many died that day. In most cases, the people died days or even weeks earlier.”

In fact, 106 of the reported deaths in Arizona on Saturday resulted from a periodic review of death certificates. Of course, that didn’t make it into the PBS report.

Issues & Insights noted that “the same thing happened in Florida.”

A wave of news reports screamed about how the state had recorded 156 deaths in one day last week.

“The grim milestones come quickly in the Sunshine State,” CNN reported. “The Florida Department of Health reported 156 new coronavirus-related deaths on Thursday, the most yet in a 24-hour period.” 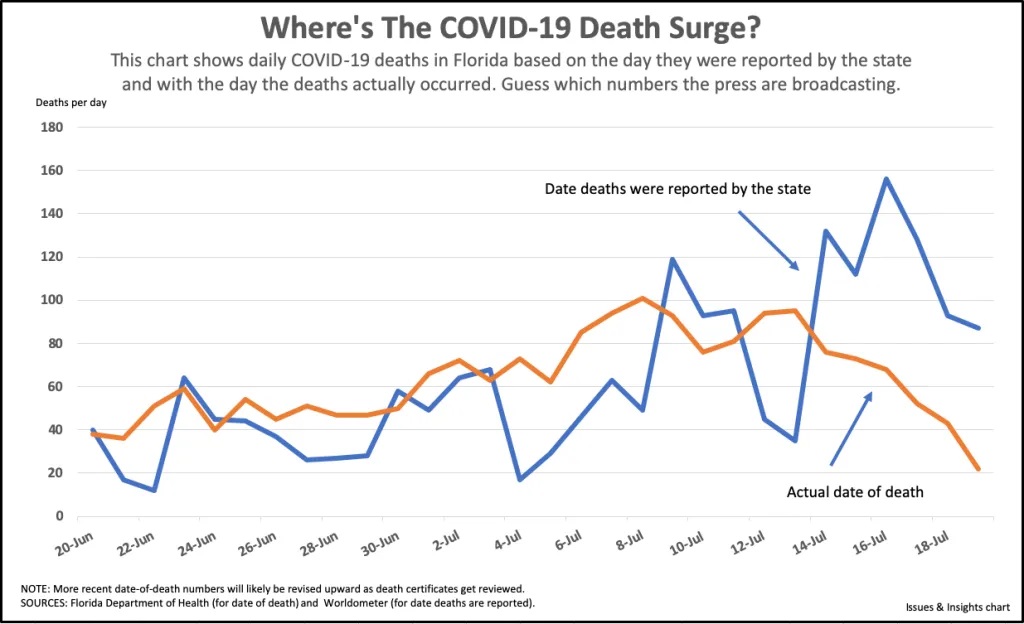 What CNN conveniently left out of its report is that 156 was the number of reported deaths that day, not the actual date of the deaths (see chart at left). Florida’s health department reported 68 (actual date) deaths on Thursday. The most deaths occurring in a single day in the state is 101.

“Nowhere in the CNN story is the difference explained to readers,” Issues & Insights pointed out.

On Tuesday, Florida reported 132 deaths. But of those, 41 occurred more than a week ago. These facts are left out of the dishonest media reports.

In Texas, a Dallas Morning News headline shouted that “As Texas sees a record 174 coronavirus deaths in a day, Gov. Greg Abbott pleads for use of masks.”

But Centers for Disease Control (CDC) data show that none of the recorded deaths in Texas occurred last week. As far as the CDC knows, only 64 died the week before that.

The Los Angeles Times reported on Tuesday that “for the weeklong period that ended Monday, 674 deaths were reported in California, the highest weekly total to date. In the previous seven-day period, 640 people died, which had also been a weekly record; the week before that, 474 died.”

The CDC, however, reports that it knows of only 48 people who died from COVID-19 in California last week, 276 the week before that, and 476 two weeks ago.

For the week ending July 18, the CDC says that only 190 COVID-related deaths are known to have occurred.

“But the trackers all show more than 5,000 deaths that week. The week before that, the CDC says it knows of 1,623 deaths, while the trackers report more than 4,600,” Issues & Insights noted.

The CDC noted: “It is important to note that it can take several weeks for death records to be submitted to National Center for Health Statistics (NCHS), processed, coded, and tabulated.”

Issues & Insights pointed out: “In other words, we have no idea how many people are actually dying from COVID-19 right now, and won’t have that information for weeks. So, doesn’t that mean that the data will eventually show that a significant surge in deaths is happening now?”

“The number of daily new cases in states such as Florida, Texas, California and Arizona appear to have already peaked. Plus, the age of those testing positive is lower, hospitals are better equipped and treatment regimens have improved since the first surge in April. And, unlike in New York, New Jersey and other northeastern states that panicked, these states aren’t sending COVID-19 patients into nursing homes, where some 40 percent of deaths nationwide occurred.

“Also, if states track ‘new’ cases the same way they do deaths — when the test results are logged into the system rather than when the infection occurred — then the peak from the recent increase in infections likely happened earlier than reported.”

That’s the case in Florida, according to a report from Just the News. It found that the state’s database includes both the “case date” — when the test results are logged in the state’s system — and “event date” — when symptoms first appeared.

However, the state uses the “case date” to create its daily chart of new infections.

Data show that Florida “was apparently undercounting thousands of cases between early and mid-June, after which through the end of June and into early July it began posting what were presumably the backlogged cases it had missed in the prior weeks,” Daniel Payne reported.

Issues & Insights concluded: “Assuming other states are taking the same approach, this means that the worst of the coronavirus ‘surge’ may have already happened and the current panic is being stoked by a negligent mainstream media that are unwilling or unable to understand the data they’re reporting.”