An expanded canvass of Pima County is adding an initial finding of a 38 percent error rate in recorded ballots to the mountain of election fraud evidence in Arizona, attorney Boris Epshteyn reported on Steve Bannon’s War Room Friday.

“Arizona is on absolute 3 November fire,” he said, “and this is just throwing more power behind it.” 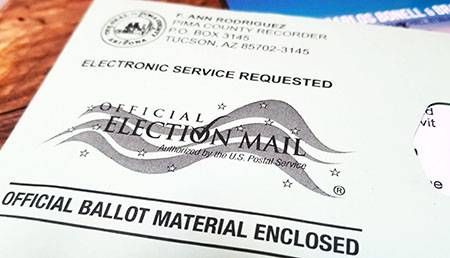 “In Pima County they did an expanded canvas. 750 doors, 350 opens. That is a significant sample,” Epshteyn, a former Special Assistant to President Donald Trump and advisor to his 2016 and 2020 campaigns, said of the breaking news. “I’m going to say this slowly, because this is not a mistake and this is not a drill — 38 percent fault rate.”

“Absolutely vital information,” Epshteyn said of the finding. “That means that 38 percent of the votes were wrong.”

Epshteyn explained how canvassing works to arrive at such a high fault rate:

Fault rate means when you open a door and you say:

‘Well, how come we have you on these voting roles?’

‘Hello, Johnny. Do you live here?’

‘Do ten other people live here?’

‘Well, how come they are registered to vote and voted from this address?’”

Bannon responded that the news explains the extreme reaction by Biden administration authorities designed to suppress canvassing in Arizona by means of criminal charges and accusations of domestic terrorism.

“This is exactly why Merrick Garland and the woman who’s his deputy that testified against President Trump at the first impeachment trial— this is exactly why on the 5th of May 2021 [they] sent a letter out to Arizona when they started the audit saying, essentially, ‘Freeze it in place. You need to freeze that canvass. Because if you even go to canvass, we are coming at you. You are a domestic terrorist. We are coming at you with criminal charges. Criminal charges,’ ” Bannon said.

“Trump won. Biden’s illegitimate. And every day we go forward, we grow stronger,” Bannon commented. “The reason we grow stronger is because we have the truth on our side.”

Epshteyn also reported that the canvassing is continuing, with the Arizona Attorney General Mark Brnovich facing increasing pressure and the legislature moving to take action.

“They are going to knock on more doors and they are getting all the info to Attorney General Mark Brnovich, who’s supposed to be taking action about this.  As the president said at his rally here in Arizona in Pinal County, we are anxiously waiting on Brnovich to do something. I also know for a fact that there is going to be major action that’s being worked on out of the legislature here.”

“They know they stole this. They know exactly how they stole this,” Bannon said. “The reason [Democratic Party operatives] are so freaked out is that we are taking this back village by village, precinct by percent, and they can’t stop it.”