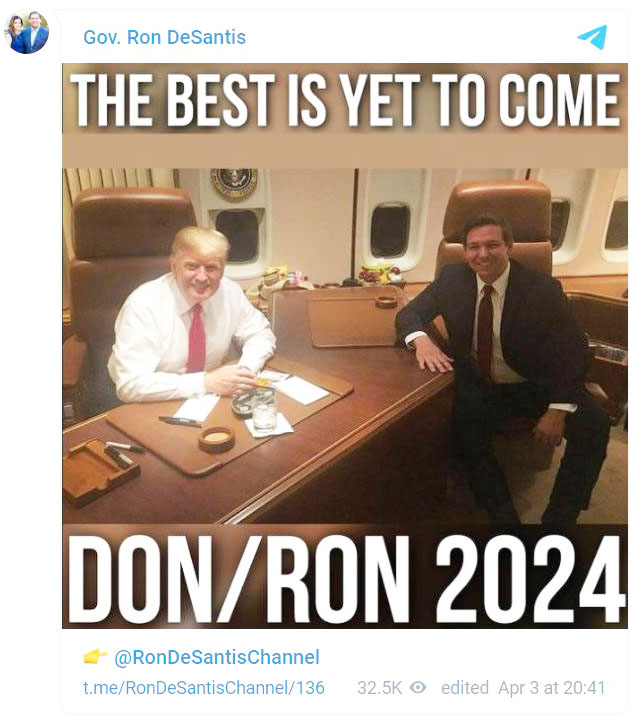 Is this the 2024 GOP presidential dream ticket?

Some observers say, under current circumstances, that the 12th Amendment would prohibit such a ticket since both DeSantis and Trump currently reside in Florida.

But the History Channel’s Sarah Pruitt noted in a July 2016 article that “there are many misconceptions about the rules of a president choosing their running mate. There’s no law or regulation against a president and vice president of the United States being from the same state. The reason why some people mistakenly believe such a prohibition exists comes down to a particular aspect of the Electoral College system laid out in Article II of the U.S. Constitution.”

Article II states: “The electors shall meet in their respective states, and vote by ballot for two persons, of whom one at least shall not be an inhabitant of the same state with themselves.”

Pruitt noted: “If an election turns out to be particularly close, the rule could potentially come into play. It almost did in the notoriously contentious election of 2000. When Texas Gov. George W. Bush chose Dick Cheney as his running mate on the Republican ticket, Cheney had been living and voting and paying taxes for five years in Texas. Shortly before the election, however, Cheney obtained a Wyoming driver’s license and put his Dallas home on the market. (He had a vacation home in Wyoming, which is the state he had formerly represented in the U.S. Congress.) Good thing for him he did: The Bush-Cheney ticket ended up winning with 271 electoral votes—just a slim five-vote margin—over Al Gore and Joe Lieberman, a total they certainly wouldn’t have hit without Texas’ 32 votes.”

In February, the Conservative Political Action Conference (CPAC) in Florida affirmed Trump’s standing as the front-runner for the Republican Party’s 2024 nomination if he wants it, but the event also cast a spotlight on DeSantis amid speculation that he too might launch a bid for the presidency.

In a straw poll of CPAC attendees, Trump dominated the field with 55 percent of the vote. DeSantis was the only other candidate in double-digits, with 21 percent of respondents backing him. Without Trump on the ballot, DeSantis got 43 percent of the vote, far ahead of second-place finisher South Dakota Gov. Kristi Noem, who drew 11 percent.