Judicial Watch announced that it received records from the State Department which show that former U.S. Ambassador to Ukraine Marie “Masha” Yovanovitch had specifically warned in 2017 about corruption allegations against Burisma Holdings.

During her November 2019 testimony in the impeachment proceedings against President Donald Trump, Yovanovitch told lawmakers that she knew little about Burisma. 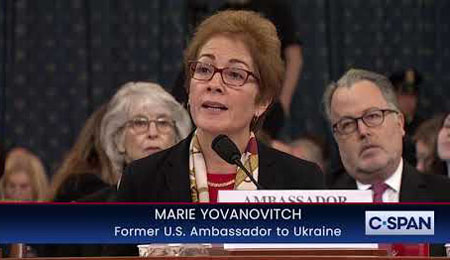 On Oct. 4, 2017, Michael Polt, a former ambassador to Estonia and Serbia and who until October 2020 was Senior Director at the McCain Institute, emailed Yovanovitch regarding the McCain Institute’s plan to conduct leadership development training for Ukrainian prosecutors that would be funded by Burisma. The idea was suggested to Polt by Sally Painter, Burisma’s lobbyist at Blue Star Strategies, and a Burisma executive. In the email, Polt notes that he was introduced to Painter by U.S. special envoy to Ukraine, Kurt Volker. Volker was also a Trump impeachment witness.

Polt emails Yovanovitch on October 4, 2017, writing: “Dear Masha: Greetings from the home front and all the best for your complex assignment in Kiev! I wonder if I could pick your brain on a leadership development we have been asked to run for Ukrainian public prosecutors here at the McCain Institute. Kurt cannot get involved with this, due to his other role as Special Envoy. Sally Painter of Blue Star Strategies, whom Kurt introduced to me and then stepped aside, together with Vadym Poharskyi of the Burisma Group have asked us whether we could provide a two-week Leadership Development and Professional Capacity Building program for Ukrainian public prosecutors proposed to us by the Ukrainian Chief Prosecutor. Burisma would fun this. We are prepared to do this, as we have done for similar groups from the DRC [Democratic Republic of the Congo] and from Pakistan. I would greatly appreciate your view if you know Burisma and/or Vadym or others.”

Yovanovitch, in her response, warned Polt about Burisma, writing: “Mike: Sorry not to have responded more quickly. I will get back to you with a fuller response, but I would urge caution in dealing with the Burisma Group. It is widely believed that the owner was the beneficiary of the corrupt justice system here and I think –to the extent that anyone is aware that Burisma is funding the training –there would be raised eyebrows in Kyiv over the irony of Burisma training prosecutors and to what end. I’d also note that the PGO [Prosecutor General’s Office] is one of the entities here that remains resolutely unreformed. After a year and a half of trying, we pulled out and reprogrammed our resources into other areas in the justice sector that were ready for change. Wish I had better news and will get back to you with more details.”

In a Nov. 7, 2017, email to Yovanovitch, Polt indicates that he is taking her “sage advice” and “not moving forward” with Burisma’s funding of the training.

During her Nov. 15, 2019 testimony before the House Intelligence Committee in the impeachment proceedings, Yovanovitch said she didn’t have much knowledge about Burisma, and noted that she only learned of its connection to the Biden family through “press reports” she read while preparing for her Senate confirmation hearing.

“Marie Yovanovitch knew much more about Burisma than what she revealed in her testimony at the sham impeachment hearings,” said Judicial Watch President Tom Fitton. “Judicial Watch will continue its efforts to unearth the shady details in the Burisma-Biden scandal that is not going to go away.”

The new production of records from the State Department also includes several emails regarding the U.S. Embassy in Kyiv’s response to John Solomon’s reporting for The Hill. The emails are almost entirely redacted, as are the names of the officials involved. In one email regarding this effort, an unidentified official cites a report by the George Soros-funded Anti-Corruption Action Center defending itself against the reporting as a “useful reference point.”

The U.S. Embassy in Kyiv closely monitored media and social media reaction to many conservatives and journalists in potential violation of federal law.

In an October production from the State Department, Judicial Watch received records which included a briefing checklist of a February 22, 2019, meeting in Kyiv between Yovanovitch and Painter. The briefing checklist noted that Painter also planned to meet with Foreign Commercial Service (FCS) Officer Martin Claessens “regarding the Burisma Group energy company.”

At the time of the meeting, Hunter Biden, son of Joe Biden, was serving on the board of directors for Burisma Holdings, a Ukrainian energy firm, despite having no previous experience in the energy industry. Biden served on the board of Burisma until his term expired in April 2019.

In September 2020, Judicial Watch made public records that show George Kent, the Obama administration’s deputy assistant secretary of state in charge of Ukraine policy, which was copied to Yovanovitch, highlighting Russia-linked media “trolling” Joe Biden over “his son’s business.”