That $15 minimum wage promised by Democrats to their voters is not happening anytime soon.

It will be a huge letdown to the 81 million Americans who supposedly voted for Joe Biden in November. 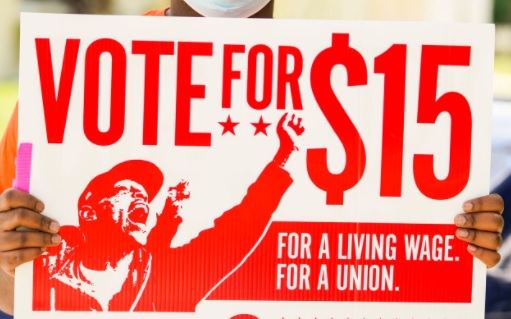 The minimum wage increase was part of the $1.9 trillion covid relief package passed by the House last week, but it has been scrubbed from the bill due to a ruling by the Senate’s parliamentarian.

“Eighty-one million people cast their ballots to elect you on a platform that called for a $15 minimum wage,” the progressives wrote in a letter to Biden and Harris that was spearheaded by California Democrat Rep. Ro Khanna, a leader of the Progressive Caucus.

“We urge you to keep that promise and call on the Presiding Officer of the Senate to refute the Senate Parliamentarian’s advice … and maintain the $15 minimum wage provision in the American Rescue Plan,” the letter said.

The presiding officer is Harris, but she has indicated she will not move to overturn the parliamentarian’s ruling.

Progressives have called on the Senate to pass the $15 minimum wage via the budget reconciliation process. That would allow a simple majority rather than the usual 60 votes, but the Senate’s Byrd rule requires provisions to impact federal spending or revenue.

Senate Parliamentarian Elizabeth MacDonough, essentially the Senate’s chief referee, said the minimum wage increase could not be included in the covid relief package.

Biden’s team has said it respects the ruling.

The pissed progressives pointed out that voters handed Democrats the White House, House and Senate last fall, in large part, because of their promises to raise the minimum wage, which has been $7.25 per hour for the past 12 years.

“We must act now to prevent tens of millions of hardworking Americans from being underpaid any longer,” the progressives wrote in their letter to Biden and Harris. “The outdated and complex Byrd rule rooted in restricting progress must not be an impediment to improving people’s lives. You have the authority to deliver a raise for millions of Americans.”

Last week, a Vox and Data for Progress poll found that 61 percent of likely voters would back a gradual minimum wage increase. In multiple Republican-leaning states, too, voters have supported ballot measures that would raise the minimum wage over time.

The Raise the Wage Act — which Democrats had pushed to keep in the covid relief package — would boost the minimum wage from $7.25 to $15 over the course of five years, and then peg additional updates to gains in the median wage.