The United States this week will seek to mobilize a global response to the opioid crisis, the U.S. State Department said on March 12. 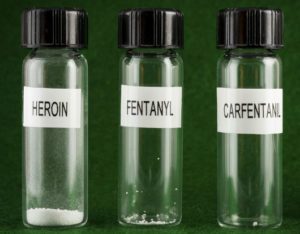 The State Department said the U.S. delegation to the 61st UN Commission on Narcotic Drugs (CND), to be held March 12-16 in Vienna, Austria, “will push to secure international control of carfentanil, a particularly lethal fentanyl analogue that is contributing to thousands of deaths in the United States.”

There are now reportedly 100 deaths a day from opioids in the United States, a statistic which could rise significantly, analysts say, if synthetic opioids like fentanyl and carfentanil continue to spread rapidly.

In February, the National Institutes of Health reported that 115 deaths occurred daily because of opioid overdose.

Deputy Assistant Secretary of State for International Narcotics and Law Enforcement Affairs James A. Walsh will lead the U.S. delegation.

The United States “will bring attention to a growing drug trafficking threat by sponsoring a side event on ‘New Methods of Synthetic Drug Trafficking,’ ” the State Department said. “This event includes expert panel presentations on challenges and experiences related to synthetic drugs being trafficked through express consignment shipments and the mail.”