Worth the popcorn? ‘There was a feeling …’ says Taylor; ‘Boring’ says White House

That tweet came from the White House prior to Wednesday’s first public impeachment hearing in the House of Representatives. 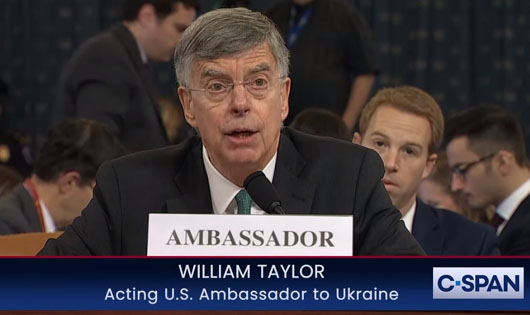 Or, as Rep. Adam Schiff’s star witness, acting Ambassador to Ukraine William Taylor might painfully put it — “umm, the way I see it is I feel like the way everybody understood it is that the president may have thought about that thing, that quid pro quo thing,” Chumley wrote.

That, Chumley noted, is how Taylor’s Q&A with Daniel Goldman, the counsel for the majority for the House Intelligence Committee, “pretty much went. Decisive, it ain’t.”

At one point in his testimony, essentially all of which, critics say, was hearsay, Taylor said: “There was a feeling by President Trump … that he had a feeling of having been wronged by Ukraine and so this was something that he felt they owed him to fix the wrong.”

Goldman said to Taylor: “You understood that to mean …”

Chumley wrote: “But therein lies the problem — the huge problem. How can Taylor, or Goldman, or any of the other witnesses Democrats have primed and ready to go for this charade of a hearing possibly, accurately, truthfully testify to Trump’s motivations, outside his actual words?”

Goldman tried, saying: “The president repeatedly says there was no quid pro quo. But regardless what you call it …”

Chumley wrote: “No. It’s not regardless what you call it. It’s either a quid pro quo, or it’s not. And if it’s not, what’s left is a case of making a case for impeachment based on personal thoughts and feelings — or on the thoughts and feelings of others. … Testifying on what someone else said and believed is hardly the stuff of rock-solid impeachable evidence.”

White House press secretary Stephanie Grisham tweeted: “This sham hearing is not only boring, it is a colossal waste of taxpayer time & money.”

Grisham tweeted that Congress should be working on passing President Donald Trump’s new trade agreement with Canada and Mexico, as well as “funding our govt & military, working on reduced drug pricing & so much more.”

She said the president “is working right now — the Dems should follow his lead!”

Trump said he was “too busy” to watch the hearing, but said Democrats have “nothing” on him.

“It’s a witch hunt, it’s a hoax. I’m too busy to watch it,” Trump told reporters during an Oval Office meeting with Turkey’s president. “I have not been briefed. There’s nothing there. I’m sure I’ll get a report.”

The president did retweet a 25-second video posted on the White House’s official Twitter account, shortly before the hearings began, ridiculing the “impeachment hoax.”

The video argues that Democrats “sought impeachment first — and an excuse later. The swamp wants a media circus — not facts or fairness.”