Who is replacing the “Peppermint Commie” as the current White House press secretary is known in some circles?

Jen Psaki’s last day as Team Biden’s mouthpiece is May 13. As Psaki is rotated to the Democrat Party’s media wing (MSNBC), Karine Jean-Pierre steps in to the White House press secretary role. 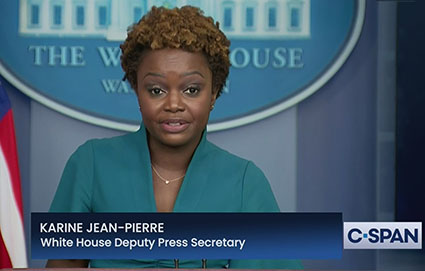 What qualifies this person replacing Psaki?

As many Democrat operatives do, Jean-Pierre made frequent appearances as a Democrat commentator on CNN and MSNBC. In 2019, she was formally hired by MSNBC as a contributor.

Jean-Pierre also fueled the bogus Trump-Russia collusion narrative. She repeatedly suggested Trump was serving at the behest of Russian President Vladimir Putin, calling Trump his “puppet” and claiming Putin “has always had control over Trump” in July 2018.

Jean-Pierre also tweeted that referring to Covid as the “China virus” (if you recall, the Covid virus originated in China) is “racist.”

According to the Endowment for Middle East Truth, (EMET) Jean-Pierre also “has a long history of deeply antisemitic and Israelophobic views.”

In a 2019 Newsweek article, Jean-Pierre encouraged Democrats not to attend the AIPAC policy conference, calling the bipartisan organization “racist” and “Islamophobic.”

Jean-Pierre “wrote that piece while she was acting spokesperson and senior advisor for Moveon.org. where she worked from April 2016 to August of 2020,” the EMET noted. “Moveon.org is an extremely radical, far-left organization that has long supported the BDS movement and defended such antisemites as Linda Sarsour who made the outrageous comment that ‘Israel was built on the idea that Jews are supreme to everyone else.’ ”

Moveon.org has also supported Michigan Democrat Rep. Rashida Tlaib, who spoke of Jews with “money” as a shadowy force, controlling the political process “from behind the curtain,” using classic antisemitic tropes. They also supported Minnesota Democrat Rep. Ilhan Omar, who has made such odious remarks as “Israel has hypnotized the world,” and “It’s all about the Benjamins.”

Said Sarah Stern, EMET Founder and President, said: “It is absolutely nauseating that the administration would bend so far to the highly progressive, radical wing of the Democratic party and appoint a spokesperson for the White House who has such clearly antisemitic and Israelophobic views, particularly while antisemitism is on the rise in the United States. This clearly demonstrates how the Biden administration is willing to turn a blind eye toward antisemitism and anti-Israel biases. To sweep under the rug, overlook and ignore Ms. Jean-Pierre’s antisemitism in the appointment of such a critically important position as White House Press Secretary is enabling it to continue.”

Jean-Pierre has been a Democrat operative since finishing school in 2003. She started as director of legislative and budget affairs for New York City Council Member James Gennaro. She was southeast regional political director for John Edwards’ failed 2008 presidential campaign and then hooked up with Barack Obama’s 2008 campaign and later joined the Obama administration in the White House Office of Political Affairs.

In 2016, she joined Martin O’Malley’s short-lived disaster of a presidential campaign as the deputy campaign manager.