Who is Aleksandar Lazarevic? Dominion Voting Systems employees, past and present, are covering their tracks online

More than 100 people who have worked for Dominion Voting Systems have removed their LinkedIn profiles since Election Day, including a Serbian national who allegedly authored a key piece of Dominion algorithm software, reports say.

From Nov. 6 to Nov. 16, more than 40 percent of the profiles of Dominion employees had disappeared, and nearly all the company’s software engineers were based in Serbia, according to independent media and social media reports. 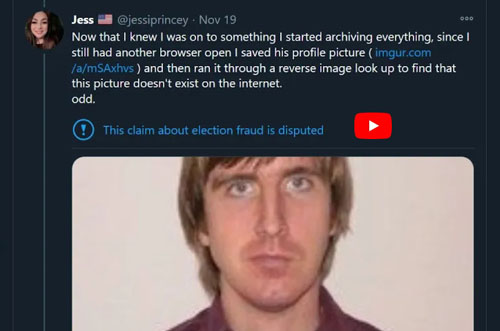 Dominion Voting Systems holds a third of the voting-machine market. Its software was used this year in Georgia, Pennsylvania, Arizona, Michigan, Wisconsin, and Nevada.

“In researching this developer I discover this person wrote the book on how to do algorithmic boosting of datasets over time. The Official name for it is SMOTE (Synthetic Minority Over-sampling Technique),” Prince wrote.

The official description of the software states: “Unlike standard boosting where all misclassified examples are given equal weights, SMOTEBoost creates synthetic examples from the rare or minority class, thus indirectly changing the updating weights and compensating for skewed distributions.
SMOTEBoost applied to several highly and moderately imbalanced data sets shows improvement in prediction performance on the minority class and overall improved F-values.”

Prince said, in layman terms, that means: “An adjustment will be made based on the top data point to keep the bottom data point on track to balance, or Tie. Now apply that idea to tabulating votes.”

Prince added: “When someone views your profile on LinkedIn, you are usually sent an email, especially if you haven’t logged on in a long time, that someone is viewing your profile, you probably have seen these. 20 minutes after viewing Aleksandar’s profile, the profile has been wiped clean.”

A search under European graduates on graduates.name found an Aleksandar Lazarevic who graduated from the University of Belgrade Faculty of Electrical Engineering with a master’s in Computer Systems Networking and Telecommunications. His position is listed as Security Software Developer at Dominion Voting Systems. He was listed as a Dominion employee from July 2015 to present.

But the profile made no mention of Dominion Voting Systems in his work experience. Prince asked: “If he was indeed hired for positive reasons, why would he not have this listed on his profile?”

“At this point I am 100% convinced that this is the man behind Scorecard. Looking through his papers and experiences and talks he’s a super accomplished Big Data, distributed systems expert, his works is even cited in CISCO patents.”

Prince added: “So why does this man have 2 profiles, why did the profile associated to Dominion get deleted once they were alerted to it being seen, and why doesn’t his professional profile have any note of working. If I were going to steal elections I would not want people capable of doing so associated with the company who counts votes.”

Voting machines are privately manufactured and developed and their code is typically proprietary.

In 2016, the Open Source Election Technology Foundation criticized proprietary development and pushed for switching from vendor-owned systems to one that that is owned “by the people of the United States.”

Dominion Voting Systems confirmed in 2016 that it had been conducting operations in Serbia for 10 years.

Suzanne Mello-Stark, a forensic computer scientist at Worcester Polytechnic Institute with a focus on voting machines, wants software and hardware transparency in voting systems. “The systems are proprietary and we don’t know what the code looks like,” she said.

Umm why are all the Dominion people deleting their profiles on LinkedIn AND looks like all their software engineers are in Serbia. Nothing could go wrong 🥴 pic.twitter.com/TUfkSvzo0Z

2020 election, are covering their tracks online, past and present, Who is Aleksandar Lazarevic? Dominion Voting Systems employees, WorldTribune.com

Who is Aleksandar Lazarevic? Dominion Voting Systems employees, past and present, are covering their tracks online added by World Tribune on November 29, 2020
View all posts by World Tribune →