Warning at UN: ‘Vaccine cannot undo damage that will stretch across years, even decades’

“Today marks an overdue and much needed moment of reckoning. None of us could have imagined, this time last year, what was to come,” stated Amb. Volkan Bozkir, the President of the UN General Assembly. He added, “COVID-19 is first and foremost a global health crisis. But it is at the same time an economic crisis, a development crisis, a humanitarian crisis, and a human rights crisis.”

Thus beyond the dire health consequences of the Covid pandemic which has plagued the world, the virus has equally caused devastating social, economic and educational disruptions.

Yet the depth of the crisis and its long-term consequences are probably beyond our imagination. 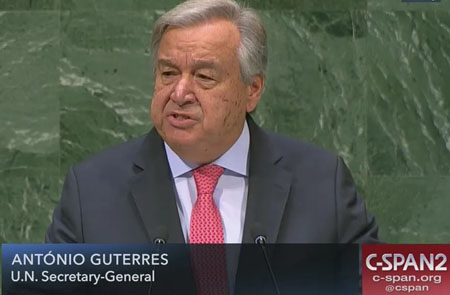 Addressing a special Assembly session on Covid, UN Secretary-General Antonio Guterres warned, “Nearly a year into the pandemic, we face a human tragedy, and a public health, human-itarian and development emergency.” He added, “For the first time since 1945, the entire world is confronted by a common threat, regardless of nationality, ethnicity or faith.”

Yet even with a vaccine on the near horizon due to the herculean efforts of the Trump Administration’s initiative Operation Warp Speed, there’s no magical serum to restore the void of closed businesses, lost dreams or shattered lives.

The doldrums of the ongoing global economic downturn, the deep and still not fully understood educational shortfalls, and their impact upon the credibility and standing of our national political systems have yet to be calculated.

“But let’s not fool ourselves,” Secretary-General Guterres advised, “a vaccine cannot undo damage that will stretch across years, even decades to come. Extreme poverty is rising; the threat of famine looms. We face the bigger global recession in eight decades.”

While we have yet to assess the profound global shock, there’s little question that we are witnessing a profound transformation which reverberates from the COVID pandemic; a crisis of profound economic, social, educational, health and yes, political proportions. This becomes clear in advanced economies but equally in the least developed countries where the pandemic’s shock waves have devastated markets, supply chains and the way we do business.

Due to the lockdowns and frustrations people remain in a psychological funk, a state of disorganized limbo where time stands still and events blur. The dignity of work has been destroyed by the arbitrary edicts from state and local government such as in New York which have encouraged desperation, confusion and seething resentment.

State groupthink government in places such as California with large scale lockdowns seems detached but intrusive at the same time.

Moreover, the psychological disruptions of the past eight months have cratered small business, devastated dreams, and shattered hopes.

COVID infection spikes remain a dangerous “invisible enemy” in the U.S. and equally so in key European countries such as France, Italy, Germany and the United Kingdom. For poorer countries in Africa or South Asia the effects are devastating.

Already 67 million people worldwide have been infected by the virus; 1.5 million have died. The U.S., Brazil, UK and France are among the most affected.

But there’s another issue as Washington still remains at loggerheads with the World Health Organization (WHO), and in turn China, concerning the deadly virus which started in Wuhan, but then spread like wildfire from Europe to North America.

In remarks to the Assembly via video, U.S. Secretary of Health and Human Services Alex Azar warned, “The key issue is not where the virus first appeared, it is whether information about the virus was shared in a timely and transparent way.” He added, “Sadly, the necessary information sharing did not happen, and this dereliction of duty has been absolutely devastating for the entire globe.”

Secretary Azar opined, “Unfortunately, we are not much closer today to the transparent information sharing that we need.”

But until and unless the major powerhouse economies such as the USA and Western Europe build back their productive capacity and surpluses so that they are able to assist with global development assistance, the poor and needy countries will simply lack the resources.

The U.S. economic rebound and dramatic drop in unemployment to 6.7 percent posts one good metric, but momentum must be maintained and entrepreneurialism encouraged.

Assembly President Bozkir reflected the sentiments of millions of people worldwide, awaiting the time the pandemic is declared defeated, “The day we can take a deep breath of fresh air without fear. The day we can shake the hands of our colleagues, embrace our families, and laugh with our friends.” It’s a seemingly simple sentiment but still likely a long way off.

even decades’, Warning at UN: ‘Vaccine cannot undo damage that will stretch across years, WorldTribune.com