During “Save America” appearances in Las Vegas on Friday and Anchorage on Saturday, former President Donald Trump called for the death penalty for drug dealers and for Alaska voters to send RINO Sen. Lisa Murkowski packing.

During his campaign event at Treasure Island Hotel & Casino in Las Vegas on Friday, Trump called for the death penalty for convicted drug dealers, cop killers, and human traffickers in order to “make America safe again.” 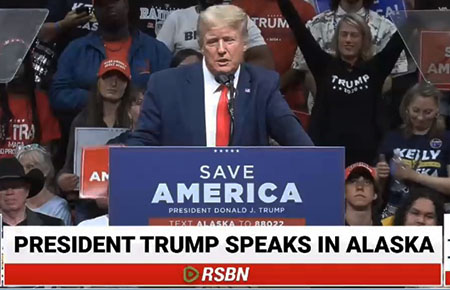 “So this is a little controversial, and I will either get a standing ovation — and I don’t care about the ovation, I care about the country — or people are going to walk out of the room for what I am about to say, but it’s time, finally, to say it,” Trump said. “If you look at countries all throughout the world, no matter where you go, the only ones that don’t have a drug problem are those that institute the death penalty for drug dealers. They’re the only ones. They don’t have any problem.”

Trump noted that China once had a drug problem, and became a vulnerable country that was seeing parts of it being attacked, before it instituted the death penalty for drug dealers.

Now, however, the drugs flow out of China, endangering lives of millions around the world, particularly via the open borders of Joe Biden’s America, Trump said.

“So instead of coming into China, they go someplace else,” Trump said, adding “these drug dealers, they just don’t deal in China. The consequences are far too great: It’s called death. The drug problem in China is our problem, because they made drugs there, but they won’t sell them there because they are afraid to do so, so they sell them through our southern border and other places. Because Trump isn’t there, it’s out of control.”

Trump cited data that suggests “each drug dealer is responsible for the death and destruction of 500 lives.”

“I’ve studied all aspects,” Trump said. “We’ve had blue ribbon committees headed up by dilettantes, society people, and others that are far more interested in seeing their names in the newspapers than stopping the massive inflow of drugs. More importantly, even if they wanted to, they wouldn’t be able to do it. They wouldn’t have a chance.

“They don’t have what’s necessary in order to win against the evil and, unfortunately, brilliant minds of those that head the cartels and other forms of drug distribution.”

Trump even took “some of the people in this room” to task for their lack of fortitude to push for the death penalty for drug dealers.

“They’re wonderful people, but sadly, they don’t have a clue,” Trump said. “Or we can be strong and do what ultimately has to be done.

“You must also have the death penalty for those that kill police officers, as well as those who kill through human trafficking.”

Trump noted the drug and human traffickers are making more money under the table than very successful American businesses, without anyone noticing.

“We can be street-wise, tough, and smart to end our problem, or we can be politically corrected, weak, and frankly extremely stupid — which is probably the way we will continue to be and lose millions and millions more people to a scourge to the likes of which our country and most other countries have never seen before.

“So do something about it. It’s the only way you’re going to win.”

On Saturday at Anchorage’s Alaska Airlines Center, Trump said Alaskans must “get Murkowski out of here, because she is not a Republican. “Murkowski has been in the Senate for 21 years. Her father held a seat for 21 years before. She’s a total creature of the Washington swamp, but much worse than that,” adding Murkowski is “a tool of a corrupt establishment the likes of which we’ve never seen. The fake news media loves her. As one of the most destructive to face RINOs, she betrayed the Alaska voters, she wiped out ANWR.”

Kelly Tshibaka is the Trump-backed candidate taking on Murkowski.

“This is your precious chance to dump the horrific RINO Sen. Lisa Murkowski, who is worse — she’s worse than a Democrat,” Trump said. “And how Sullivan doesn’t come out and denounce her is amazing to me. Lisa Murkowski approves the person [Deb Haaland] and that in their first day of office, wipes out ANWR.”

Trump continued: “Murkowski repeatedly voted in favor of amnesty for illegal aliens, and she voted against allowing funding for the border wall. She opposed Brett Kavanaugh’s confirmation to the Supreme Court. He just gave you the most important vote you’ve ever had, but she was against them,” the former president said. “She voted to approve Joe Biden’s radical Left Justice Ketanji Brown Jackson, the most far-left justice in history … Lisa Murkowski approved her.

“Murkowski voted to support taxpayer-funded, late-term abortions, nine months, the baby can be born like in Virginia, remember the governor of Virginia? The baby’s born, and then we’ll sit down with a mother and find out what we want to do with it. Remember that guy? Well, that’s basically what they’re approving. That’s basically what they’re doing, and Murkowski voted in favor of it.”

“You’re going to send the great, legendary Sarah Palin to the U.S. House of Representatives. Incredible woman,: Trump said before thanking Palin for endorsing him back in 2016.

“I’m here to say I like you best. I know your opponents and I like you way better,” Trump said of the former Alaska governor.