Although Canadian officials and their media lackeys insist otherwise, the Freedom Convoy prompted the government in Ontario on Monday to announce it would end Covid restrictions, including the requirement for vaccine passports. 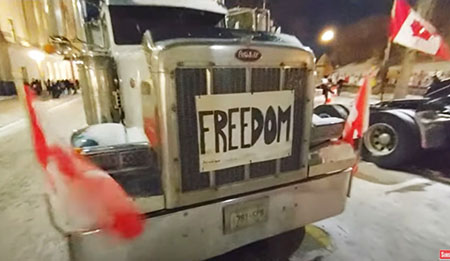 Ontario Premier Doug Ford went out of his way to claim the changes were not being made in response to the Freedom Convoy because pandemic restrictions were always meant to be time-limited. (Yeah, remember 15 days of lockdown to stop the spread?)

The Freedom Convoy has widespread public support, which was reflected in polls, which panicked politicians not only in Canada but the United States as well.

Seeing the writing on the wall, Democrat governors across the U.S. have lifted Covid restrictions.

“Democrats in this country are looking north to their friends in the ruling party of Canada, and what they see there scares them,” Carlson said.

Meanwhile, groups of American truckers have planned a similar convoy that may roll into Washington, D.C. Almost on cue, Democrat Mayor Muriel Bowser announced Monday that D.C. will end its requirement for people entering businesses to show proof of vaccination starting this week and will lift its mask mandate for businesses starting on March 1.

“Canada’s working class has finally rebelled after years of relentless abuse. Truck drivers are threatening to topple Justin Trudeau’s creepy little government with their big rigs, and they may succeed actually. The protests against Justin Trudeau’s vaccine mandates had been far more effective than anyone in charge imagined. For Democrats in the United States, that’s a pretty obvious lesson.”

The Freedom Convoy’s blockade of key transport hubs forced the Ford Motor Company to shut down one of its manufacturing plants and to operate another plant with a skeleton crew. Toyota and General Motors also reported shutting down portions of their operations due to parts shortages.

The Freedom Convoy “is causing deep pain to at least one global industry. It’s hard to overstate the historical significance of what we’re watching right here,” Carlson said.

The trucker convoy, Carlson said, “is the single most successful human rights protest in a generation. If nothing else, it has been a very useful reminder to our entitled ruling class that working class men can be pushed, but only so far. When they push back, it hurts. It turns out the truck drivers are more important to a country’s future than say diversity consultants or even MSNBC contributors. Who knew?”