Plenty of Democrats are clamoring for new faces in the party. This spring, they will get – the Clintons.

“The Clinton family has made sporadic and often subdued appearances in the 18 months (538 days) since Hillary Clinton lost her presidential election. But we’re about to see a lot more of them this spring,” Mike Allen wrote for Axios on April 30. 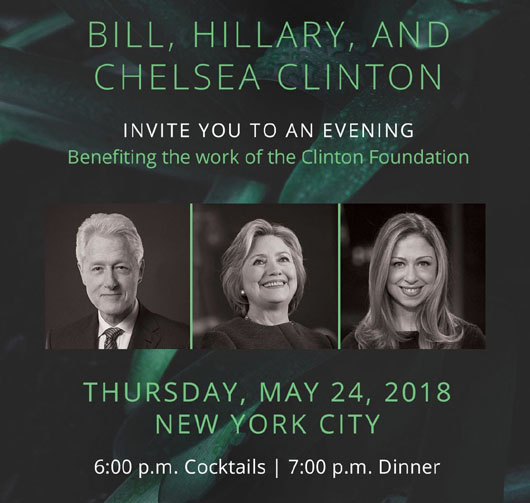 An invitation to a new Clinton Foundation benefit, scheduled for May 24, was sent out last week to longtime supporters of the Clintons.

Prices for the gala range from $2,500 (“Friend”) for cocktail party and dinner, up to $100,000 (“Chair”) for “Leadership Reception for two, a premium table of ten, program recognition as Gala Chair and invitations to the Clinton Foundation Annual Briefing.”

Hillary Clinton, meanwhile, held the first 2018 meeting of her Onward Together political group in New York City on April 30. The twice failed presidential candidate and another failed presidential candidate, Howard Dean, were slated to welcome 11 partner organizations for a day of sessions “about harnessing the energy and activism post-election.” Groups had the chance to meet with 150 donors. Last year, Onward Together had 33,000 donors and gave over $1 million to partner groups, Allen’s report noted. The group says that figure will be higher for midterms this year.

Former President Bill Clinton publishes a novel on June 4, co-authored with thriller writer James Patterson, “The President Is Missing”. The pair have a multi-city book tour in June – together and separately, and an eight-part series comes to Showtime in 2019.

“This family has been on the national stage for 26 years – all or most of the lifetime of anyone under 50. Chelsea Clinton, now 38, was 11 when her father, Arkansas Gov. Bill Clinton, announced his entry into the race for the Democratic presidential nomination in October 1991. He was 45 then; is 71 now,” Allen wrote.