The new border economy: Trafficking boom is function of growing chaos and carnage

The lawlessness and anarchy on our southern border is creeping into everyday life more and more with each passing week. And illegal alien smuggling rings are having no problem finding Americans to hire as contractors to help their human cargo reach their destinations in the interior of the U.S.

Here is a mini-roundup of the latest madness: 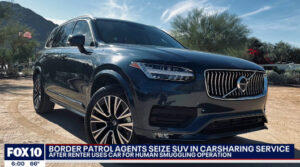 Jan. 5 Fox10 Phoenix report – Guy rents out his car on Turo car sharing marketplace, and it gets used to smuggle illegal aliens:

[Ahmad] Abdallah, who was renting out his SUV for the past few months on the Turo platform, recounted what happened with the last person who rented his car.

“I give her the car, but I have a bad feeling, so I’m tracking the car via Lojack,” said Abdallah. “She starts going to Tucson, past Tucson to Nogales. I told her if this car crosses the border, I’m going to report it stolen. She says, ‘no, I’m just picking up my sister.’ So then, she starts going east, then back up north.”

Abdallah says the driver went more than 60 miles out of the way, only to get back to the I-10. He then called DPS, and a trooper contacted him.

This has become a regular occurrence in Phoenix area:

“We’ve seen an increase. People are doing this more. You just don’t know what people are using the vehicle for,” said Jesus Vasavilbaso. “The majority of those vehicles are being rented in Phoenix, so cartels and smuggling organizations are working real hard in working at recruiting people in the Phoenix area.”

Cpl. Angel Morales Gaitan, a Marine assigned to Camp Pendleton, was arrested just after 1 p.m. Saturday in Campo. A Border Patrol agent in an unmarked car said the Kia Optima was driving “suspiciously” and its driver appeared to not know where he was going, the complaint states.

The agent called for a marked car to make a traffic stop, and two people were found in the car’s backseat apparently trying to hide, the complaint states. Morales was arrested on suspicion of transportation of undocumented immigrants.

The cartels have got it down to a regular and reliable service. Transportation provided once you sneak over the border:

Morales told law enforcement he was hired after responding to an advertisement on Instagram for drivers offering $1,000 per trip, the complaint says. He told agents he was to drive the couple to Los Angeles.

The two migrants, both Mexican nationals, told authorities that they climbed the border fence using a rope and were directed to a pick-up location north of the border, according to the complaint. The migrants were being held as material witnesses in Morales’ criminal prosecution.

Dec. 30 Laredo Morning Times article – High-speed pursuit on the highway… and the vehicle is filled with illegals:

In the incident in question, a Highway Patrolman encountered a Ford SUV on U.S. 83 in Webb County before the suspect allegedly started a high-speed pursuit in south Laredo.

According to the report from DPS, the vehicle began to evade officers near Laredo College before officers eventually brought the pursuit to an end by using a tire deflation device near Rio Bravo.

The driver was reportedly arrested for human smuggling, evading arrest and possession of marijuana.

Ten illegal immigrants were also apprehended following the pursuit and eventually referred to the United States Border Patrol, according to the release.

Jan. 3 KLBK-13 in Lubbock, Texas report: Grisly, but at least we have the more traditional light aircraft over the border:

On December 30, the Sheriff’s Office, as well as Presidio Police, U.S. Border Patrol, the Texas Department of Transportation, the Fire Department and Emergency Services responded to a small plane crash just north of the Presidio International Airport. At the scene, deputies found injured passengers who were part of a “smuggling attempt gone wrong.”

Investigators say Peters was piloting a small plane full of undocumented migrants trying to enter the country illegally. According to a Facebook post, Peters was carrying five other people in the four-passenger plane and the excessive weight of the extra people, coupled with low fuel, contributed to the crash.

The pilot was able to flee the scene despite apparently being badly injured:

According to the Sheriff’s Office, following the crash, a possibly injured Peters left the scene. The smuggled passengers with injuries were taken to a hospital in El Paso for treatment, the others were turned over to border agents for processing….

Peters is now wanted on multiple charges including human smuggling, evading arrest, and deadly conduct…. Investigators believe Peters sustained a head injury in the crash and possibly even lost an eye.

The Wild West environment on our Mexican border has turned from tragedy to something far worse. The insanity can only be compared to the outrageous lawlessness found in the South Florida drug importation heyday of the late 1970s and early 1980s, as memorably captured in the lurid 2006 documentary “Cocaine Cowboys.”

And, just like Miami circa 1979, the violence is going to continue to spill over to the community at large until it reaches some point that will be considered impossible to shrug off. One would think this has happened already. But apparently more innocent bystander Americans are going to have to be killed before a certain threshold is reached and our federal government is forced to truly address the crisis.

The new border economy: Trafficking boom is function of growing chaos and carnage