Team Biden has lost track of and will likely never find hundreds of thousands of illegals who came across the southern border last year, according to an internal Department of Homeland Security (DHS) report obtained by The Washington Free Beacon. 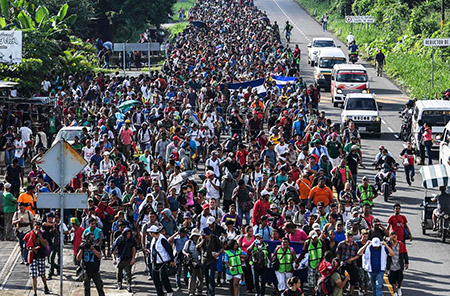 Between March and June 2021, when Customs and Border Protection (CBP) agents encountered more than 720,000 migrants along the U.S.-Mexico border, agents failed to record the U.S. addresses of approximately one-third of the illegals, the report said.

Many of those who entered the country at the southern border failed to report to Immigration and Customs Enforcement (ICE) after their release, according to the DHS report.

All migrants who are not immediately deported are required to check in at an ICE office within 60 days of their release, but the report shows that about 30% of migrants released into the U.S. between March and September 2021 “did not comply with release terms.”

The illegals who did not provide a U.S. address and schedule an asylum court date are practically untraceable.

According to the report, agents began to use “ad hoc methods,” such as whiteboards to track migrant whereabouts with little success.

“DHS’s IT systems did not effectively allow CBP and U.S. Immigration and Customs Enforcement personnel to track migrants from apprehension to release or transfer,” the report said.

Team Biden doesn’t know whereabouts of hundreds of thousands of illegals added by Editor Two on July 25, 2022
View all posts by Editor Two →