The Left is employing one old and one new technique to indoctrinate America’s school children in critical race theory.

The old is witchcraft — seriously. 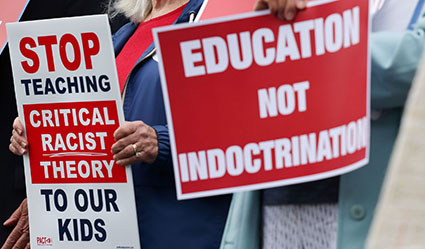 Writing for The Federalist on Dec. 6, Spencer Lindquist cited California’s Campbell Union High School District. The district, which includes the Silicon Valley communities of San Jose, Campbell, and Saratoga, “has promoted more than 100 ‘equity resources’ to students and staff, including a document that taught students how to put a curse on those who say ‘all lives matter.’ ”

The new is something known as social-emotional learning.

When she voiced her concerns about the racist ideology of social-emotional learning, she was fired, the report noted.

One equity resource link at the Campbell school district takes readers to an “Anti-Racism Resource List,” which teaches about “white fragility” and claims that racism can only be perpetrated by white people, Lindquist noted.

“One of the ‘resources’ provided was a Trevor Noah speech labeled ‘Why rioting makes sense,’ followed by an unhinged anti-white rant from Sonya Renee Taylor, demanding that white people ‘throw your white body’ on police officers and ‘put their bodies on the line for the purpose of justice,’ ” Lindquist wrote.

Samuel Martin, a 2019 graduate of the district’s Branham High School, told The Federalist: “The idea that white students must ‘dismantle themselves’ in the context of their personality is cultish. Not only is it cultish, but it is deliberate in that this school system wants its’ white students to hate themselves. Do these people honestly think that drilling racial identitarianism into childrens’ heads from a young age is going to make them less racist?”

The resource list also includes a section titled “Hex”. It tells the reader: “Hexing people is an important way to get out anger and frustration.” It suggests that those who say “all lives matter” or commit “microaggressions,” should be targeted. “Write your own hex poem, cursing that person,” it instructs.

Meanwhile, McWilliams told the Daily Signal that “social-emotional learning, is a teaching method that has for the past five, six years transformed the education and system. And it comes from CASEL, which is the Collaborative for Academic, Social, and Emotional Learning. Basically, they sold it to the public education system as a way to teach children life skills that they are not receiving. But through my two years of research and understanding of this program, it really is the key to what parents across this country are looking for right now. Social-emotional learning is the psychological manipulation of our children to adopt the critical race theory ideology.”

McWilliams said the program is in schools in all 50 states.

“So this is relevant to everyone — it comes in through different programs. And so there’s a lot of names for the programs that they use, but they all follow a framework. And the framework that they use from CASEL is based on the critical race theory ideology,” McWilliams said. “So they influence children and they want to shift their perception of their values and beliefs and attitudes, worldview through the critical race theory viewpoint, so that ideology.”

McWilliams noted that social-emotional learning “comes into the schools under the guise of they want to teach the life skills that children need. And so they teach these competencies — that’s what they call it — to the children through many, many ways. But the way that I became introduced to it was that we would give the children a scenario, a social scenario, and we would give them a skill that they would have to apply to that scenario.”

McWilliams continued: “I will give you an example. At my school, the competencies were called ‘habits.’ And just to be clear, other people at other schools may call them different things. It’s really a game of semantics. That’s why a lot of people across the country are so confused right now. But at my school they were called ‘habits.’ And so I would give them a scenario and then I would say, ‘OK, now, you need to apply this habit.’

“One of the habits that we had was seek first to understand before you were understood. And I always tell people that that does not sound like a bad skill as adults. When you understand what is comfortable for you, your morals, your values, that skill, we all use that skill at times. But they’re influencing these children to use that skill in all scenarios to be successful.

“And at the same time in 2019, my school transitioned the restrooms to be inclusive. So the idea behind this whole program is to get children to compromise what they believe, what they’ve been told, and to start believing these new social norms.”